CHANGES TO TRAINING / TRAINING THIS WEEK

Please Note: The weekly training schedule plus location has changed/going to change

New players always wanted. Just turn up or email: contact@annanrfc.com if you want more info. No experience necessary. You all have to start from somewhere!

1ST XV AT HOME TO STRATHENDRICK

The 1st XV have a big match at Violetbank on Saturday when they entertain 9th placed Strathendrick.

After last weeks loss to promotion chasing Kilmarnock, the 1st XV are currently sitting in 7th.

Cambuslang and Strathendrick also have a game in hand – so every point counts as we near the mid point of the West 1 league season.

A win for Annan would put a bit of distance between them and the bottom spot. Irvine are away to Lenzie and Cambuslang are away to East Kilbride.

The league is looking like its splitting into 3. With the teams mentioned above fighting to avoid the bottom spot, Lenzie and Stewartry perhaps needing the top teams to start dropping points (but looking safe from the relegation fight) while Allan Glens, Kilmarnock, East Kilbride and Garnock look like the teams fighting it out for the one promotion place.

For Annan, it’s been a tough first half of the season but with every match so far the black and amber have been usually one score away from taking the win. On average over the 9 matches, Annan have scored 17 points per match while the opposition have scored 24.

Annan have only lost once to Strathendrick in 6 previous meetings but this was last year….at Violetbank.

A big match on Saturday then for both teams. A game that could go a long way to determining the way the rest of the season could turn out. 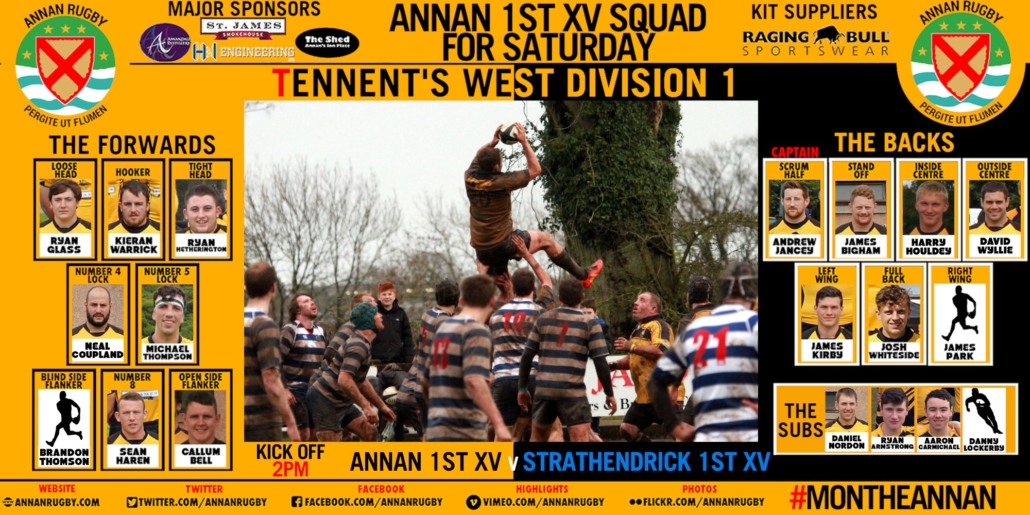 The Annan team taking on Strathendrick

WARRIORS TAKE ON THE LEAGUE LEADERS ON SUNDAY

After the narrow loss to 2nd placed Garioch Ladies last Sunday, the Warriors have another tough match this Sunday when they face National 1 leaders Heriot Blue Ladies at Violetbank.

Depending on the result of the Glasgow Uni v Garioch Ladies match, a Heriots win could seal the Championship with a win on Sunday. Its will probably come down to their last match next weekend though

The Warriors are safe from the potential relegation spot  (looking like this will be Glasgow Uni Ladies) and a 5th placed finish is still a possibility although that would require the Warriors to win 2 of their last 3 matches (away to Oban and away to Broughton Ladies) and Broughton losing to Howe Harlequins on Sunday.

It’s been a tough old season but the Warriors have shown they are capable of competing with the top teams in National 1 and Sundays match would be a great time to put on another winning Violetbank performance.

If you like your live rugby action, then Sunday at Violetbank is definitely the place to be as both the P1-P7 Tigers and U14 Tigers are playing at Violetbank

The P1-P7 Tigers are hosting a Mini Rugby Festival with teams from Dumfries and Galloway and beyond taking part in a festival of great rugby.

Parents and players to meet at 10.30am for the 11am start

All welcome to watch and support the future of rugby in SW Scotland.

Then the U14 Tigers take on local friends and rivals Moffat Rams. The U14 lads are having a great season. Unbeaten in 5 matches they will be wanting to make it 6 from 6. But it will a tough old game with Moffat Rams as it usually is.

Players to meet as arranged with the coaches for the 2pm kick off.

And last, but by no means least, the mighty U16 Tigers are on the road to Stewartry for their latest Galant Conference match.

The teams met in a pre-season friendly at the start of the season, when the Tigers ran out 38-25 winners at the Greenlaw. Another hard and high scoring match could be on the cards.

Players to meet as arranged with the coaches for the 2pm kick off.

The Annan 2nd XV and Hornet squads do not have a match this weekend.

Best of luck to all the teams this Saturday and Sunday.