THE HISTORY OF ANNAN RUGBY.

There were several attempts to set up a rugby club in Annan but all attempts eventually failed. The articles below are taken from an article from a tour programme by Ian Gilmour. 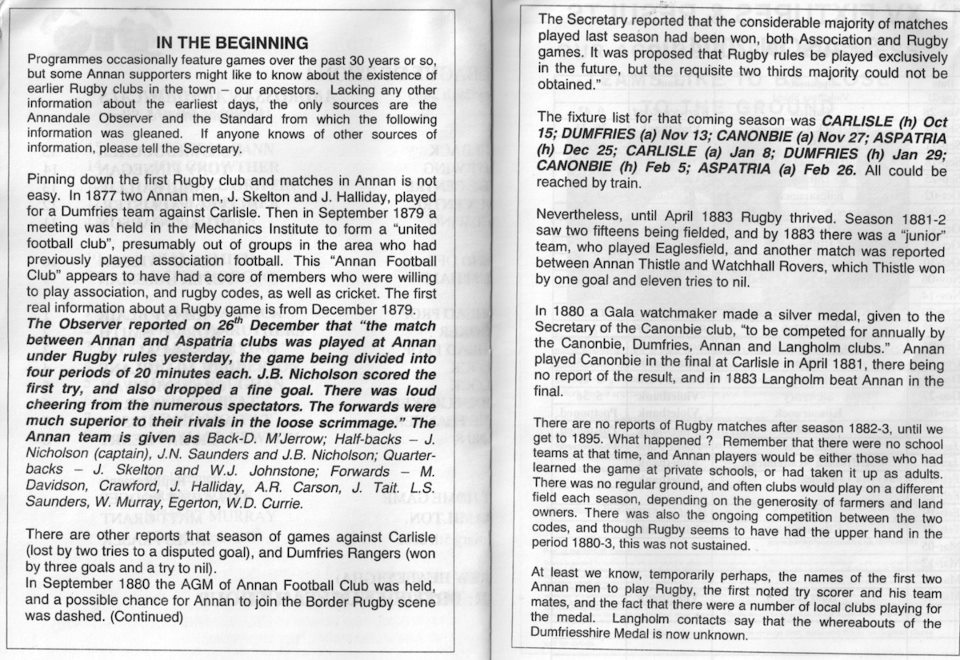 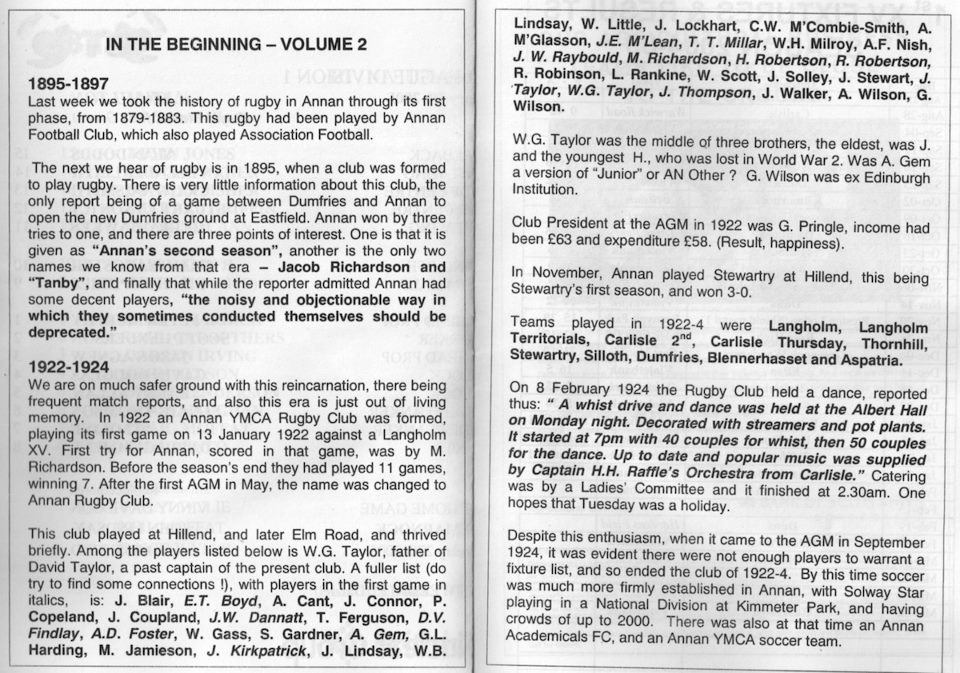 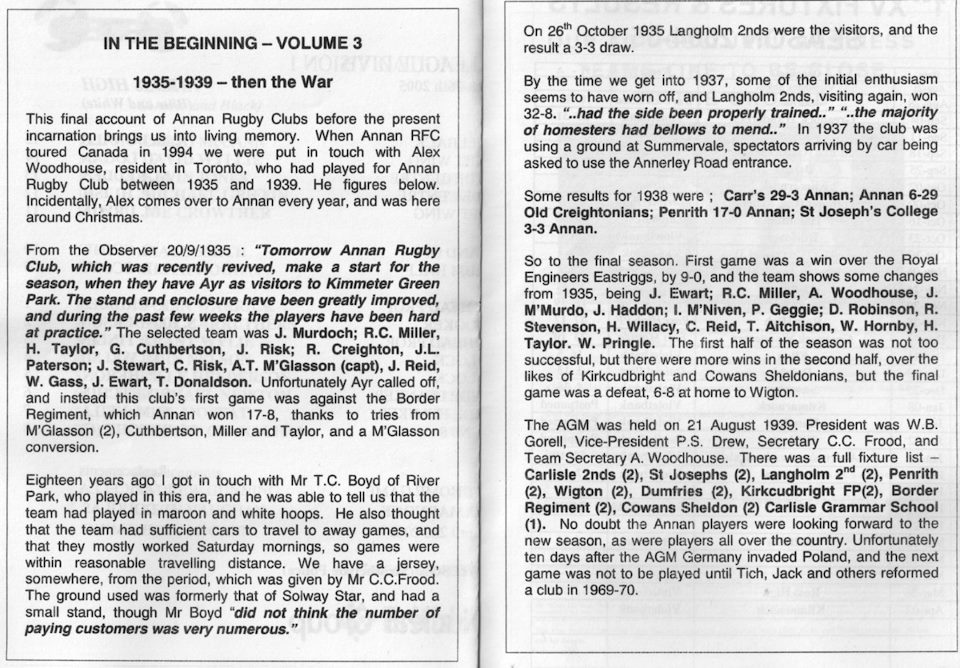 In 1968 it was decided by a group of Annan men that after a 30 year break – it was about time the greatest rugby club ever to be called Annan Rugby made its reappearance.

Although evening and weekend training sessions had been taking place for several years, the only barrier to regular games was getting a big enough pool of players.

A large number of the founding members/players can be seen in the picture below. 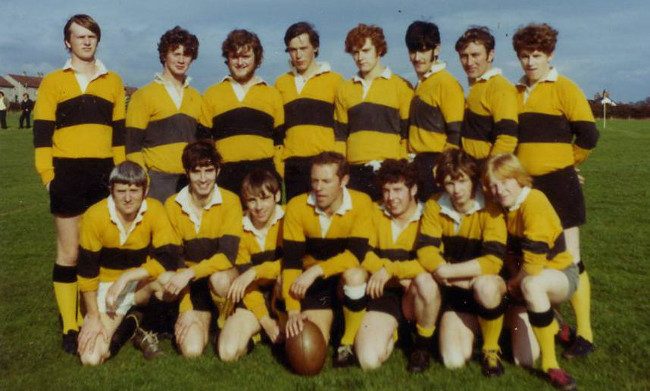 Although there were also a lot of other people who helped establish the club in 1968. Names that will appear here on this glorious list of honour to the founders of this great club!

In 1968 Annan played its first game before becoming formally affiliated in 1969 with the SRU for insurance purposes.

Please Note: Over the years the shade of yellow has changed. Annan have played in shades of yellow to gold to the current colour of amber. Some say that a few games at the old Weyroc changed the nice yellow strips to gold/amber strips anyway!

Thanks to Bill Allison who helped clarify some of this early history. Bill’s first game was on the 9th March 1969 – a 9-9 draw with old foes Creighton. Bill was 16 and 1 day as the committee at the time would not allow u16’s to play in adult matches!

In 1979, in search of “competitive” rugby, Annan applied to the Border District League. The teams in this Border League were the junior teams of Hawick, Gala, Selkirk, Jed-Forest, Kelso, Melrose and Langholm.

The standard of this league was (and still is) very high but promotion to the National Leagues was impossible in this league. Annan had some success in this league (but never winning it) and many players were awarded South District Union caps. In 1979, Annan decided to purchase an old Church hall in Bank Street for conversion into a club house. In 1980, the Clubhouse officially opened.

Youth sections from P1-U18 were started during this time.

In 1994 Annan had their first Overseas Tour to Canada which was deemed a great success.

In 1995, the SRU decided that the Leagues should be restructured, and the 7 National Divisions of 14 teams were split into 4 Premier Leagues of 8 teams and 7 National Leagues of 10 teams. Annan were put into National League Division 4 for the season 1995-1996. During the 4 years of continued success, plenty of representative honours were obtained and many of the players that had left Annan returned.

The 7 league championships in a row is to this day a Scottish Rugby record.

In 1995 Annan Rugby set up the first Scottish Rugby Club website on the World-Wide Interweb.

Annan toured Texas in 1997. Annan completed their tour winning four out of their 5 tour matches. There only defeat being against the Texas State XV.

In 1997, the first Annan Ladies team was set up. This lasted for 5 seasons before being disbanded, For a time at least!

In 1999 Annan opened their new ground just outside Annan at Violetbank.

Violetbank has 2 full-size rugby pitches, a club house, fitness rooms and will eventually have indoor training facilities and a covered stand.

Annan competed in National League Division 1 for a couple of years.

Annan 1st XV had their most successful season to date in season 2002-2003 gaining promotion to Premier 3 and winning the BT Bowl at Murrayfield.

Unfortunately Annan’s Premier League journey was short lived when, despite a late rally in the season, they were relegated for the first time in the club’s history.

A certain Mr Alex Dunbar came through the youth ranks and played 2 full seasons for the Annan 1st XV before heading off in 2009. Not sure what happened to Alex. Hope he had a great rugby career after Annan.

However their stay in West 2 was a short one as Annan 1st XV were promoted as undefeated champions.

During season 2014/15 the Women at Annan rugby decided to get into the act, and the Annan Warriors Women’s Rugby team and Annan Hornets (U12-U18) Girls rugby teams were set up.

It was another undefeated league season and was one of the reasons that the club were awarded Scottish Club Rugby’s top honour of BT Club of the Season.

After being promoted to National 1 for season 2017/18, the mighty Annan Warriors won the National 1 Championship at the first time of asking and therefore the Warriors were the first Annan Rugby club to play in a top league in Scotland.

In season 2019/20 – 3 Annan players were selected for the Scotland Futures set up. Lexie Steel (U18 Future). Lily Glendinning (U20 Future) And Ellie Henderson (U18 Future) – a well deserved selection!

Annan currently have 11 teams that play on a regular basis. Here’s to another successful 50 years!

Like most of the world, the covid-19 crisis happened in 2020, but looking forward to getting back to rugby now that the worst is over!

One thing we did during lockdown, is buy our ground at Violetbank.

On May 5th 2021, Annan Rugby completed the purchase of its ground at Violetbank, Annan, having leased it since relocating there in 1999.

This marks the beginning of a new chapter for the club as ownership will allow it to move forward and develop its facilities to meet the future demands not only of the rugby club, but the wider community. 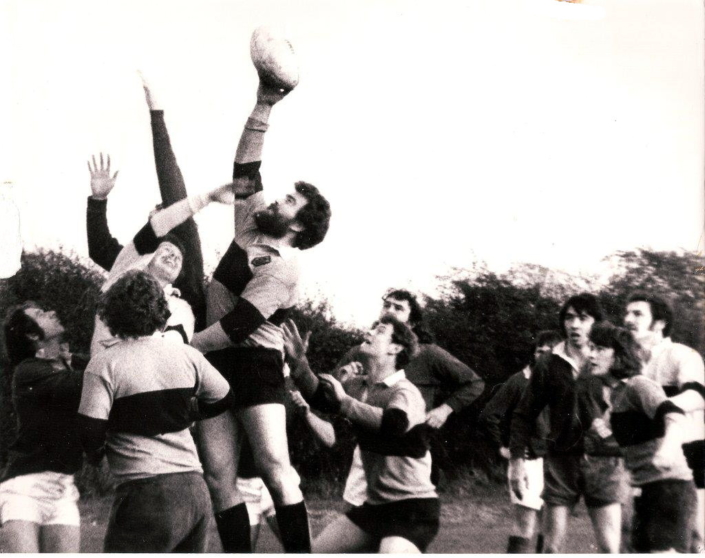 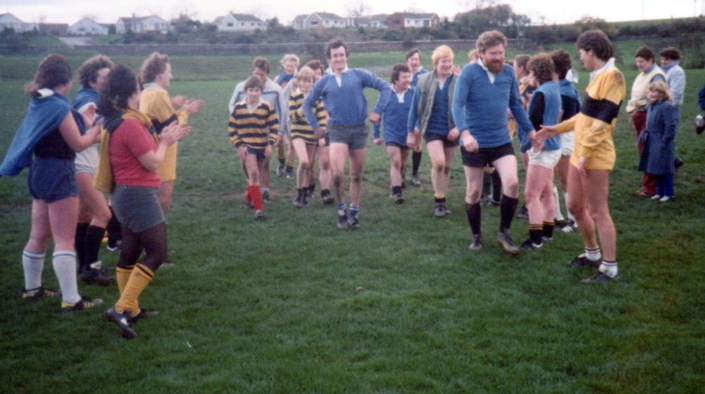 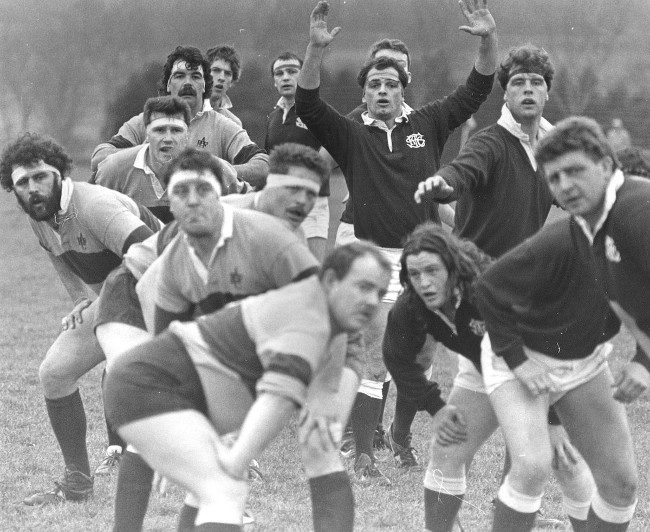 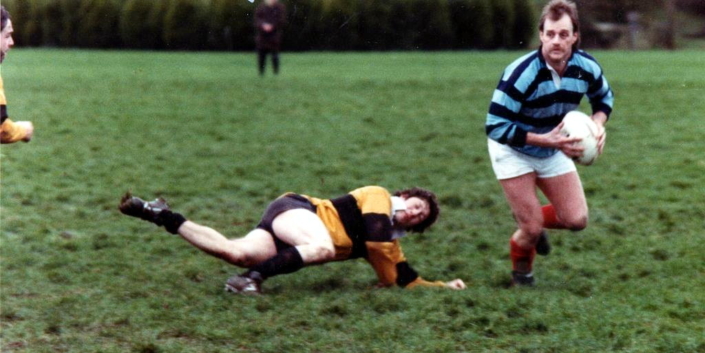 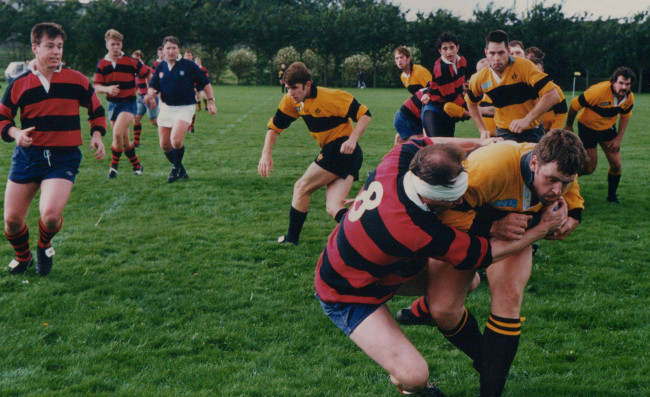 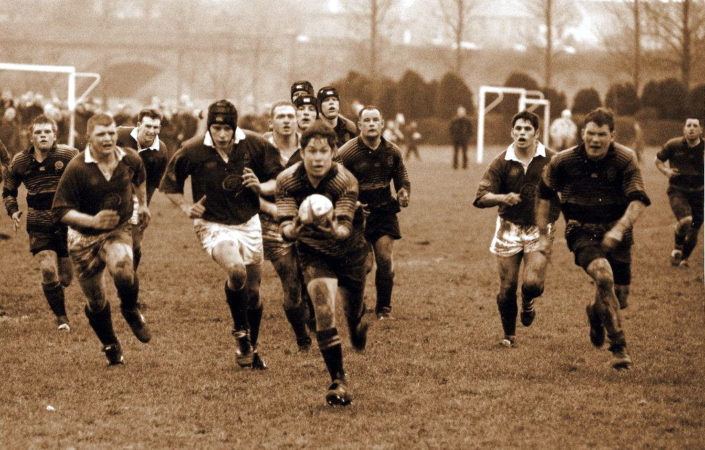 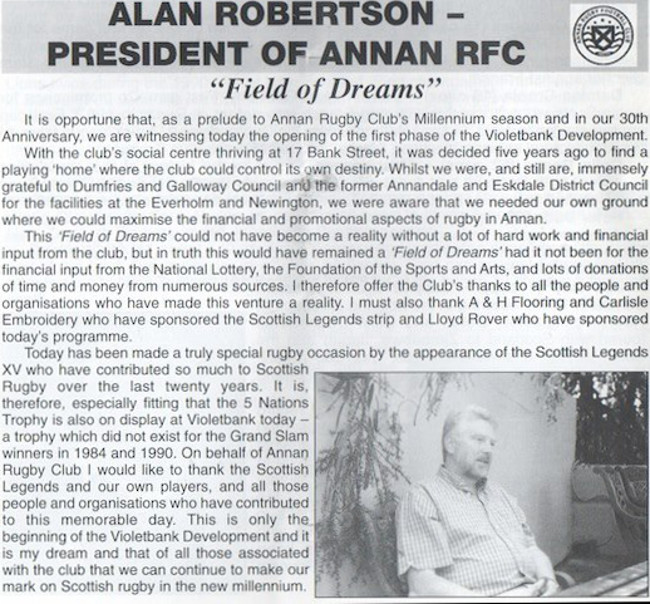 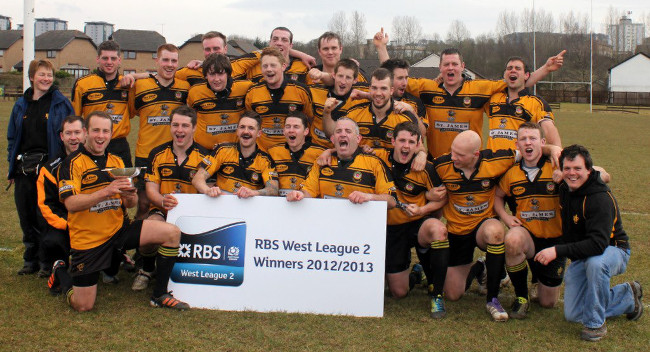 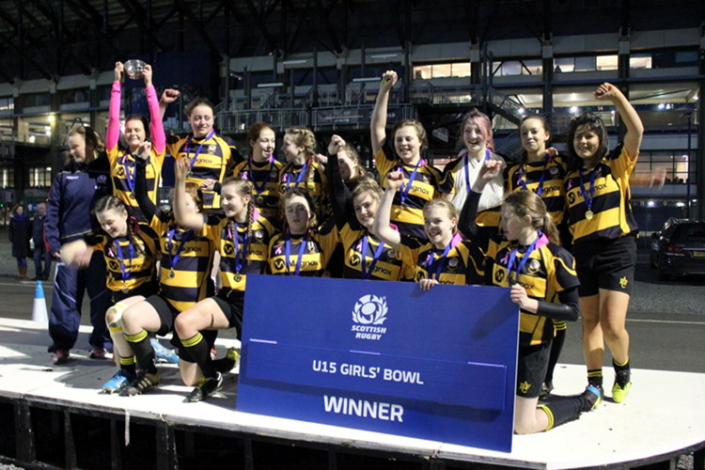 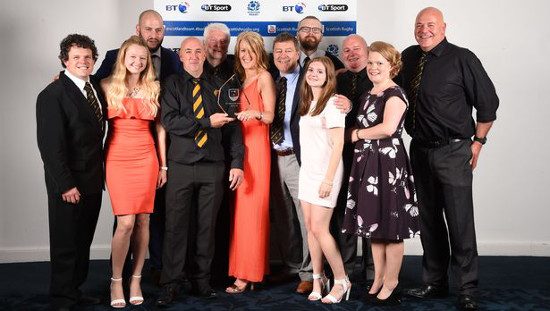 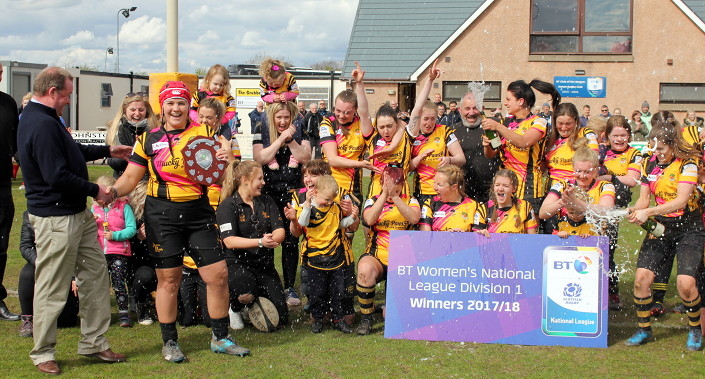 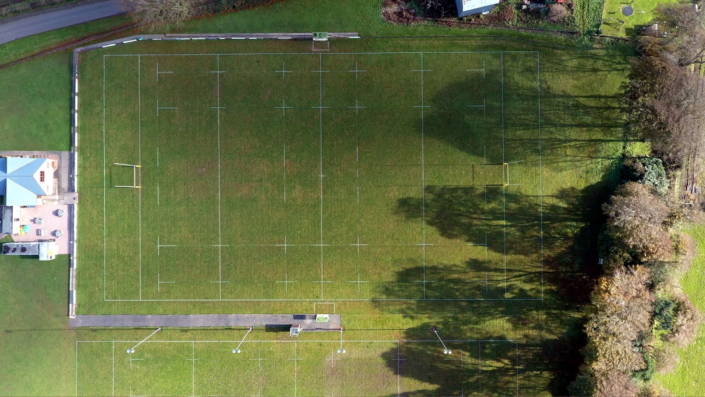