Annan Rugby are delighted to announce that 3 of the Clubs players have been included in the Scotland Futures Squads at U20 and U18 level.

Back row forward Lily Glendinning at U20 level, centre Lexie Steel and back row Ellie Henderson at U18 level.

All three girls attended trials way back in August at BT Murrayfield and their hard work and skills were soon identified by the relevant age group coaches and selectors. Since then the girls have trained at least two times a week with their national squads at Ravenscraig Sports Facility and at BT Murrayfield on strength and conditioning and skill sessions in addition to their Club training.

Lily who has advanced from the U18 Squad, was in the Scotland U18 Futures team who played against England U18 at Preston last year. In addition to her national recognition Lily has also advanced to and been a mainstay of the Annan Warriors senior women’s team this season.

Both Lexie and Ellie were in the Glasgow early talent identification programme last year, which gave them the springboard to step up to the U18 futures squad and the demands this entails.

Club President Gary Coupland said ‘ This is excellent news for the Club and girls rugby in this area. These three girls have shown through their positive mindset, hard work and skill, that they are worthy role models for all to aspire to.  They have identified how Scottish Rugby has a clear pathway for all girls to progress from a small rural club such as ours to achieve National recognition.  I’d also like to pay tribute to the club coaches who haver worked with the girls through the age levels to help them achieve this recognition’.

On Sunday 20th October, four of the Clubs U16 girls, Lucy Stevenson, Holly Clark, Zoe Mitchell and Sarah Hunter, made their first steps up from club rugby, having been invited to a Glasgow Player Development Session at Largs, to potentially start their representative careers.  Good luck to them from all at Annan Rugby. 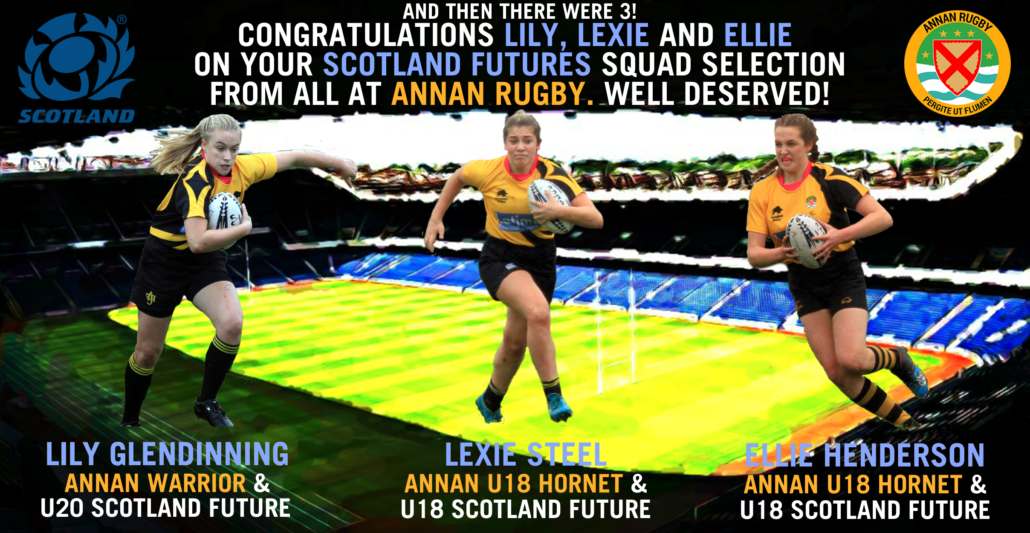