With temperatures touching -3C on departure the Warriors along with the U14 Hornets & numerous supporters heading along the A75 arriving to play Wigtownshire Ladies in what seemed like almost tropical conditions to play the final league game of the season.

Due to picking up several injuries last week only 14 players were available so the game was played under Game on principles, with the Warriors knowing they would need to maintain the level of physicality from last week to gain control & give the pacy home backs limited ball.

The game started well with Annan taking control with some strong carries through the forwards, building phases & moving the ball well, however from spilled pass Wigtownshire broke clear to open the scoring with a try & conversion after 10 minutes. This blow seemed to knock Annan back with a further 3 tries following within the next short period.

However Annan were given a massive spark when full back Zoe Mitchell retrieved a kick within her own half to beat several Wigtownshire defenders, chip the full back& win the ensuing foot race to score a cracking try, this was swiftly followed by another score for Annan when scrum half Nicole Barlow threw one of her now trademark dummies to race clear & score.

Unfortunately, the comeback was short lived when the home further stretched their lead with 2 tries before half time.

The 2nd half took on much of the same vain with Shire scoring 5 tries from distance with their pacy backs to the fore & Annan although working hard in defence not completing all the tackles. When Annan did have the ball they looked dangerous with forwards, Hannah Paterson, Ashley Clark, Rhianna Parker–Clevett all carrying hard & making plenty ground, with the backs moving the ball wide when the opportunity arose.

Annan did manage another 4 tries, 2 from Nicole Barlow & 1 each from Zoe Mitchell & Hannah Paterson.

All in all a fairly good performance considering the conditions & lower numbers with the team still rebuilding. With the league phase of the season now complete all eyes now turn to the cup competition where the Warriors will find themselves in the Bowl competition with the carrot of a trip to Murrayfield if we do well.

On the day in the forwards Hannah Paterson, Rhianna Parker-Clevett & Ashley Cole played well with number 8 Holly Clark given forward of the match.

In the backs midfield 3 of Kim McClure, Megan Brogan & Joanne Clark played well but back of the match went to Zoe Mitchell.

A big thanks to all the supporters who made the trip & also to those of the U14 Hornets who braved the cold after their game to cheer the Warriors on.

Following the game both the Annan & Wigtownshire players & supporters adorned their Christmas Jumpers & money raised from this & the Warrior pie face collected & donated to the My Names Doddie Foundation. 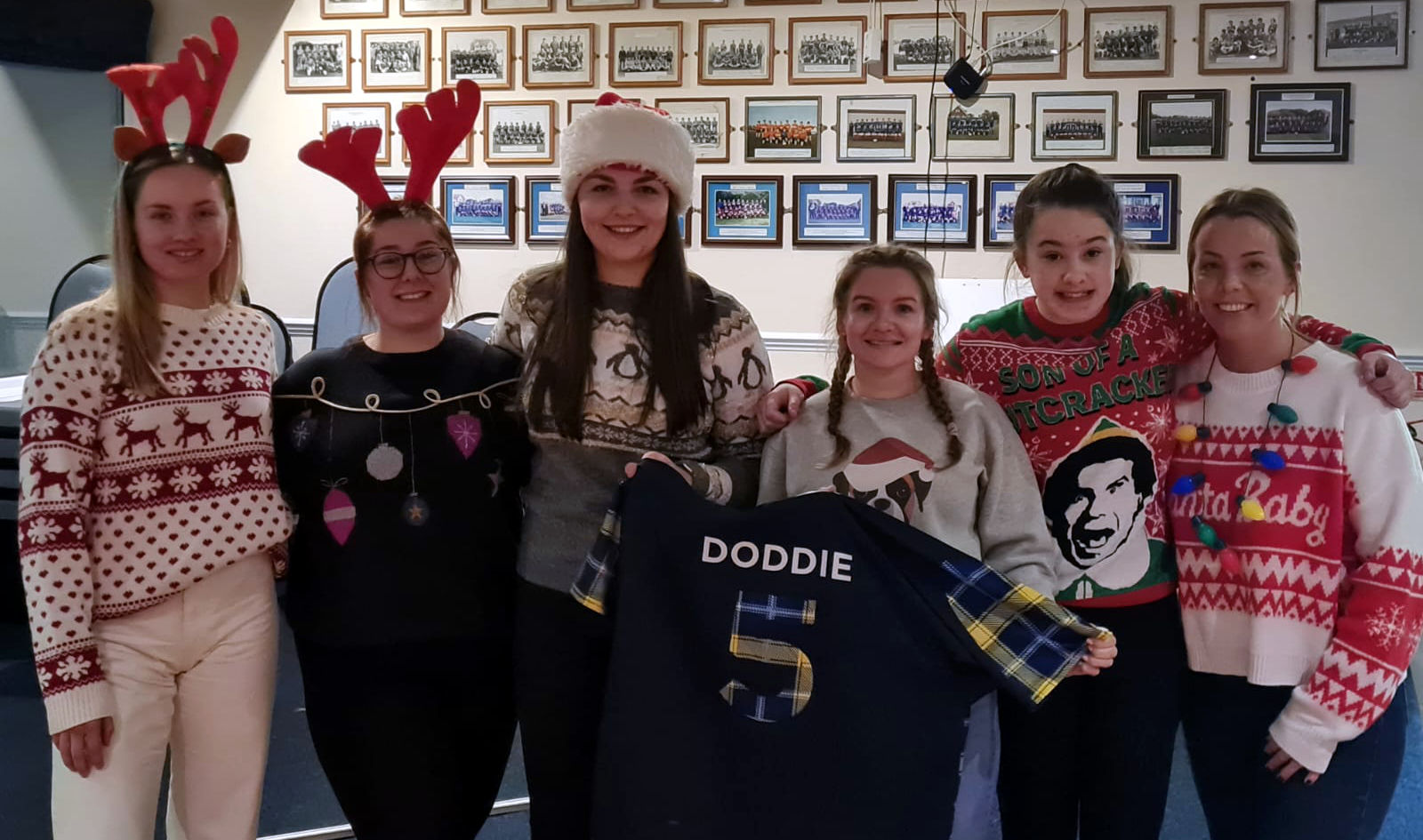