U14 GIRLS MATCH REPORT FROM JAMES CABLE AND TERRI GRAHAM

“The U14 Hornets travelled to Marr College for a chaotic evolution festival.

The team played a total of seven, 8 minute games, the first being against Cambuslang.

Cambuslang started very strong and with this their first game of the season the Hornets took time to readjust to match play and conceded a number of tries. The girls soon started to find their form and scored a couple of good tries but in an eight minute game the damage had already been done and they lost their first game.

By the second game against Lenzie the girls had started to find their feet and scored several tries from the breakdown. Both teams were evenly matched with Lenzie replying to our success with equally good tries.

By the time they’d got into our forth game the girls were well into the stride and despite the greasy conditions scored from set piece and open play, in particular Yvie and Anna (who would later be recognised for her efforts) started to run home tries, 9 in total.

Their final game of the festival was against Kilmarnock, the Hornets beat them convincingly

“Well done to all girls today.

It was a long and slightly chaotic day but all played well. I didn’t get any team photos today as I was here, there and everywhere unfortunately.

Please apologise to the girls on my behalf for that. 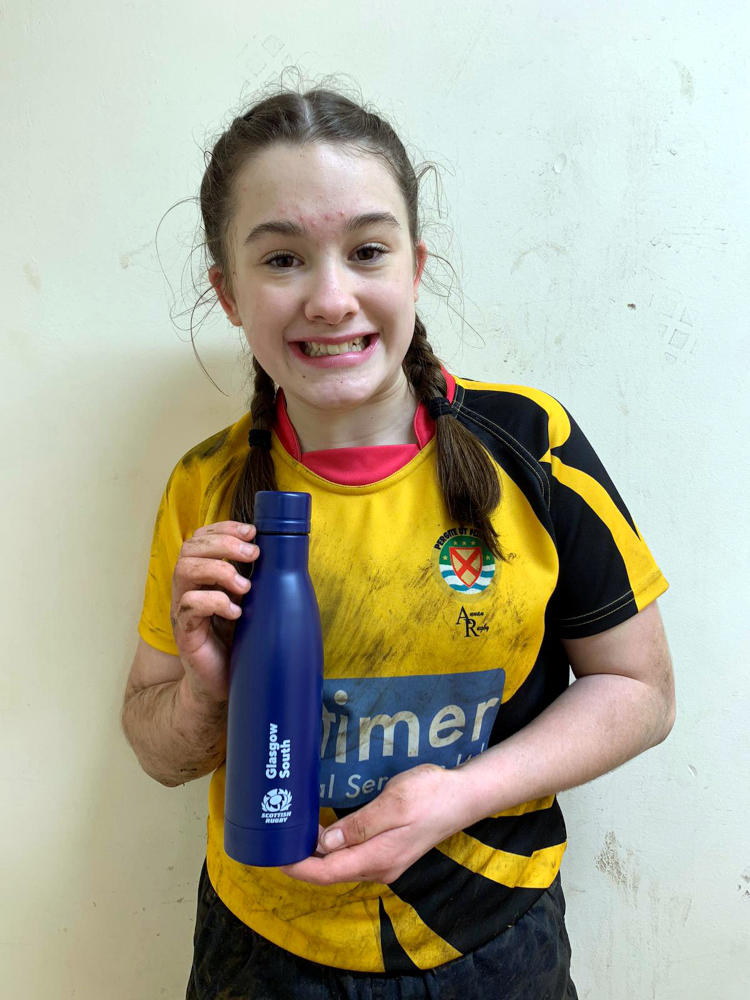 However, I did get a photo after Anna Canning, was highlighted by the referees from her games and awarded a wee Glasgow South prize for her hard work.

The Hornets also travelled to Marr on Sunday for the Glasgow South Regional games at U16 and U18 level against Glasgow North.

The Annan U18 Girls selected for the Glasgow South Squad were Hannah, Tess, Niamh, Ellie, Zoe and Erin while the U16 Girls were Louisa and Megan

All got game game time, some more that others, but unfortunately both games were stopped as injuries occurred which required an ambulance to attend.

In fact 3 ambulances were in attendance at the same time. We wish all injured a speedy recovery.

Glasgow South were beaten in both matches but well played to all the Girls.

Adya also traveled up looking for a bit of training and game time at U18 level. However this never materialised which was quite disappointing for her, her coaches and her family who had given up their whole day to travel to Marr.

Situations like this do not encourage girls at the U18 level to carry on with rugby. Girls at this age have lots of other distractions which pull them away from the game.

We, as in everyone involved with Girls Rugby, coaches/parents and the SRU, will have to do better to support these committed girls

Thank you for the effort Adya.

Three further U16 girls Alysha, Daisy and Pagan also traveled up. Joined up with a few other girls and had 3 games and played some great rugby. Well done all