Make no mistake, this game was much much closer than the scoreline suggests, but on the day a combination of stout Annan defence, a few wrong decisions from their opponents and a dash of luck allowed Annan to return from their shortest league trip of the season with a good morale boosting win and an unbroken try line to boot.

Annan travelled through to Castle Douglas with 16 players although shorn of backs through injury and unavailability usual wing forward Callum Kirk was asked to step in at centre. After the disappointing result last week Annan were hoping for a bounce-back reaction and the opening exchanges were fairly even with play concentrated in the middle of the field with a few handling errors from both teams.

The deadlock was broken after around 10mins when Annan strung together a back’s move to put winger Jake Mitchell into space and he outstripped the defence to score, Fraser McMillan converted well to make it 7-0 to the visitors.  Stewartry reacted well to the set back and with a few Annan handling errors and hesitancy in defence they laid siege to the Annan line. Annan produced good linespeed in defence and put in some good low tackles to hold Stewartry out and worked their way downfield. They were to have a few good chances to score through strong running from Josh Cairns and Indy Swan in particular, but an over-eagerness to take the ball into contact rather than pass to team mates in space saw the chances go abegging.

Shortly before half time however Annan scored again. Whilst working their way down the right flank space was spotted on the left and a good call and more importantly good listening and awareness saw the ball fed out to Mitchell again who scooted into the far corner for his second. McMillan’s conversion from the touchline just skirted under the bar and the half time whistle followed soon after. HT Stewartry 0 Annan 12.

The Annan coaches urged on the players to keep their concentration and to continue their defensive work and to try to use the ball rather than get isolated in contact.

The second half followed a similar pattern to the first in that play swung end to end, Stewartry perhaps edged it in terms of possession but Annan were always capable of making breaks to clear their lines, sometimes giving their coaches and supporters butterflies as they played out from their own in goal area.

When Annan did make it to their opponent’s 22m area they were efficient and scored three second half tries through Cairns, Swan and Elliott Hepburn, two converted by McMillan and the other by Ben Latimer.

The last 5mins saw the hosts batter away at the Annan line to try to salvage a score but Annan produced yet another defensive set and eventually the mistake came, and the referee ended the game.

All of the Annan players were better than the previous week and as a group they and the coaches are going to need to discover how they can be more consistent from week to week.  The lineout was a good source of ball both in attack and defence, and the linespeed and rucking also showed improvement.

Cairns and Swan were the pick of the forwards in attack, whilst Latimer had perhaps his best game of the year and Mitchell took his scores well. But the coaches’ player of the day for his performance out of position was Callum Kirk.

Annan have two more league games before Christmas, the first of which sees one of the league’s form teams Cambuslang travel to Violetbank next week.  Another stern challenge for Annan and one which they will need their ‘A Game’ for.

Thanks as ever to all at Stewartry for their hospitality and to all Annan parents and helpers with travel and support yesterday. 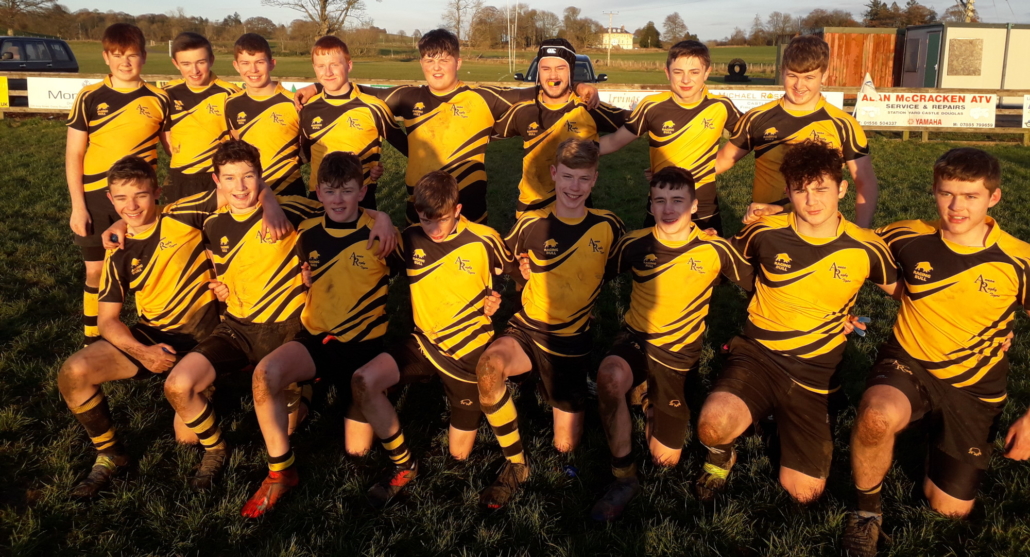 The winning U16 squad

Alas no photos from this match