Rugby returned to Violetbank on Saturday after 17 months of little rugby action due to the pandemic with the whole club involved from minis through to Veterans.

The Youth Section kicked of the events at 11am with games at each age group.

The Annan mini and youth players

The rugby on display was testament to the efforts of not only the players involved but also the work and efforts put in by their coaches.

The winning Mini and Youth teams

The young Chicks arrived with 15 players and after some serious recruitment over the past few weeks, the Mother Hens had 11 players on board.

Due to a few players not having recent (or any) contact experience, it was decided to play with alternative rules, the main one being ‘touch’ instead of tackles.

However, to allow some element of competition it was agreed that after a ‘touch’ the ball would be presented on the ground and players were allowed to ruck and compete for the ball. There were also contested 3-woman scrums as well.

The game was played in three ten-minute slots and began with the Chicks playing a very up-tempo game, and the Mother Hens working hard to keep them at bay with a good defensive line.

Overall, some great break-away tries from the Chicks who also cleared out well and had a few turnovers at the rucks.

The Mother Hens held their own, with two well worked tries and some clever strategic play (the pink tutu and fresh legs from the side-lines for the final ten minutes).

Well done to everyone for making it an enjoyable, fun game of rugby!

Try scorers for the Chicks were Eve, Kirsty B and Lily and for the Mother Hens, Eilidh and Linden.

A big thank you to Andrew Jancey for refereeing the game, to Linden and Rhianna for organising the teams and to all of the players for coming along and making it happen.

Special mentions must go to those that played their first game of rugby – a fantastic effort and no one looked out of place on the pitch!

The Annan Mother Hens and the Annan Chicks

FOR THE SARAH “OUR BELLA” HAPPY MEMORIES TROPHY.

This annual event, normally held at the end of the season was the ninth meeting of the Annan Rugby veterans (the Grizzlies) and the Annan Rugby young pups (The Meerkats).

Anyone who thought that they had come along to see an exhibition match between Annan’s Old Guard and Annan’s Future were hugely surprised as to what unfolded which was a full blooded, no quarter asked of given, rugby encounter which totally enthralled the large crowd of spectators who had turned up at Violetbank for a complete day with rugby, barbeque and bar.

The first quarter was evenly matched with the Grizzlies holding sway in the set piece play utilising their weight advantage.

This advantage led to the Grizzlies scoring first with prop Colin ‘Choc’ Warrick crashed over from a driving maul.

This proved to be the only time during the 80 minutes that the Grizzlies were in front score-wise as the Meerkats slowly, using their fitness and speed, worked their way back into the game scoring at regular intervals throughout the game with tries from Ryan Armstrong, Max Coupland, Ollie Ferdinand, Josh Whiteside, James Kirby and Alex Laurie.

The Grizzlies scored a consolation try with scrum half Mark Clark squirming his way over the whitewash. With Josh Whiteside successful with two conversions the final score was Annan Grizzlies 10 Annan Meerkats 34.

All in all a thoroughly enjoyable game of rugby to watch for the large contingent of supporters who had turned up to celebrate ‘The Return of Rugby’ to Violetbank.

The Annan Grizzlies and Meerkats – Class of 2021 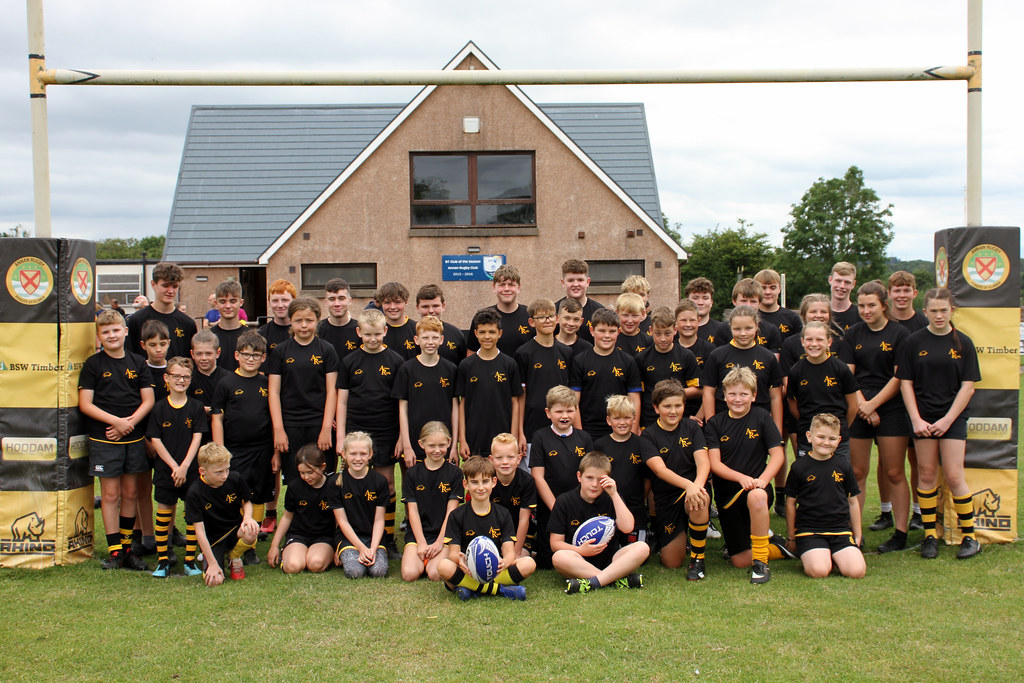