On Saturday 12th October, Annan 1st XV travelled to Ayrshire to take on Irvine 1st XV in their latest Tennent’s West League Division 1 fixture. After a strong performance against the league leaders Allan Glens the previous week and a settled squad for the first time this season, the boys were optimistic another good performance would see them realise their first win of the season.

On arrival at Irvine apart from a brisk breeze conditions were almost perfect for a game of rugby. 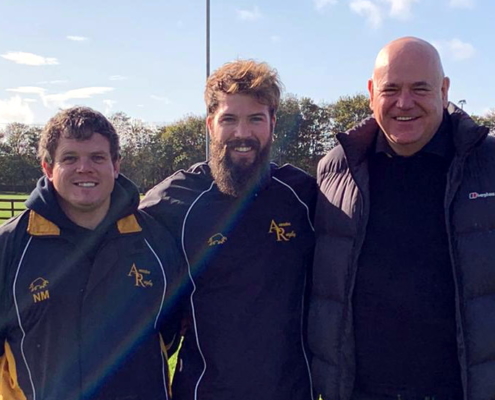 On the game getting underway Annan started poorly which led to Irvine encroaching deep into the Annan half and being awarded a penalty for an infringement at the ruck by the visitors, which they duly converted to take a 3-0 lead.

The Annan boys then took control of the situation and from the restart took the game to Irvine, which after several phases, allowed prop Ryan Heatherington to crash over for an unconverted try. Annan continued to pressure the Irvine line and after good hands which exploited the full width of the pitch, winger James Kirby scored another unconverted try in the corner to give Annan a 3-10 lead.

Annan continued to have most of the territory and pressure, however poor decision making and passing at crucial times negated them furthering their lead. Almost on the stroke of half Irvine put together a few phases of their own, which with some poor defence, allowed them to level the scores with a converted try.

At the start of the next have both teams started with an increased intensity which was broken after as few minutes when Ryan Hetherington turned over ball in the Annan half and took off up the middle of the pitch towards the Irvine posts, like a greyhound after a hair. He was ably supported by Callum Bell who received the ball from him about 10 metres in to the Irvine half. Callum then continued at pace towards the Irvine line outstripping the remaining defenders in a manner reminiscent of ‘ Eric Liddle’ in Chariots of Fire, to score a very barbarianesque try. Josh Whiteside adding the conversion to make it 10-17 to Annan.

Further sustained pressure and phases by Annan from the restart, saw some excellent handling and with some fancy footwork Mr 200 himself, Alex Halliday crossed the whitewash for an unconverted try, which was his 103rd try for the club.

With their tails now up the Annan boys continued to take it to Irvine and Captain Andrew Jancey scored a 5th unconverted try to make it 10-27.

This seemed to cause the Annan boys to drop some of their intensity, which allowed Irvine to gain a further two unconverted tries, one of which was a peach by the Irvine number 8, who chipped over the Annan first line of defence, gathered his own kick, dummying the last Annan defender to score.

As the final whistle went Annan were pounding the Irvine try line in pursuit of a 6th, when they were adjudged by the referee to have been held up.

A good win for the boys, especially on the road, however they were unable ot maintain the intensity of the previous week against Allan Glens and some lapses in defence especially around the first tackle area will give the coaches something to work on this week ahead of the visit of Garnock.