After a couple of days of rainfall, the Warriors took to a soft n moist Violetbank pitch for the penultimate time in National One this season against Glasgow Uni Ladies. The five previous encounters have all been keenly contested with the Warriors coming out on top each time, so the Ladies were determined to keep that run going.

The Warriors being led out by Chelsea Barnes who was playing her 50th game. Straight from the kick off Annan won the ball and pressed hard driving deep into the Uni territory recycling the ball and building phases trying to crack the well drilled defence. Second rows Megan Muir coming close only to be penalised for holding on.

The Uni Ladies failed to make touch from the kick and winger Kirsty Barlow returned the ball with interest and following 11 phases of play the ball was swept wide for Jane Stewart to score her 1st try of the season.

Straight from the restart with ball not going the required 10 metres the Warriors attacked from the scrum on half way taking the attack to the opposition with the ball going through the phases with forwards carrying & also the backs moving the ball. Once again, the ball being moved left for centres Ciara O’Connell & Chelsea Barnes linking to send winger Jane Stewart in for her 2nd try in 2 minutes, her 90th & 91st in Warriors colours.

After this quick burst the Uni Ladies came back into the game but couldn’t get a foothold, in it mainly due to the Warriors defensive effort, with the line speed & strong tackling breaking up the attack on numerous occasions.

The game then went through a scrappy period mainly due to a downpour of rain that would have been more fitting to the typhoon that impacted the recent Rugby World Cup. However, it was during this downpour that the Warriors scored there 3rd try with number 8 Kayleigh Warrick crashing over from close range.

With the rain still coming down in droves the Uni ladies had their best period of the half pushing Annan back due to strong running & a lapse in the Warriors discipline, following several minutes of repeat defensive sets deep in their own 22 they managed to turn the ball over for wing forward Lily Glendinning to break a tackle a race home from inside her own half, showing that all the extra fitness work she is doing within the Scottish Futures U20 paying dividends.

The final impact on the scoreboard in the first half again went to Annan when from a scrum, the Glasgow team moved the ball wide only for it not to make the winger & when she recovered the ball on the floor the ball was picked up by centre Chelsea Barnes who fed winger Kirsty Barlow who raced in to score.

With the pitch conditions deteriorating after the downpour, the first period of the 2nd half was quite scrappy, but neither team could be faulted with the endeavour shown as both tried to play good rugby. Annan maintained the upper hand forcing Glasgow to have to kick clear to relieve pressure with the ball being returned with determination by full back Kim Taylor ably supported by replacement winger Megan Ker.

With about 20 minutes gone the half kicked into life when from one of these kick returns the ball was fed to prop Nadine Barnes who broke the 1st tackle & dummied the full back to romp in from 40 metres out. As an aside Nadine was heard to say that it was 39 metres too far for her to run from.

Annan continued the pressure going into the last 15 minutes and from Glasgow scrum just outside their 22 the Annan forwards exerted pressure and won the ball against the head through a good strike by replacement hooker Linden Moffat. Scrum half Nicole Barlow broke blind only to be caught in a last ditch tackle by the full back but was still able to offload to supporting Number 8 Kayleigh Warrick who dived over the line for her 2nd of the day.

The final act of the game again went to the Warriors when from a scrum on the 10m line number 8 Kayleigh Warrick picked made ground & linked with replacement scrum half Allana McWilliam who raced towards the line before not for the 1st time in the game the Glasgow fullback made a try saving tackle, the ball however was recycled quickly and shifted through the hands for winger Jennifer McGregor to score her 1st Warriors try.

Credit must be given to both teams as despite the less than perfect conditions both teams tried to play good running rugby.

A good all round performance by the Warriors with both backs & forwards linking well in attack & defence, showing that the things being worked on in training are impacting on the game.

Best in the forwards were Nadine Barnes, Kayleigh Warrick, Megan Muir & Megan Alexander with forward of the match going to Ruth Peacock.

In the backs Ali Cook, Ciara O’Connell, Megan Ker & Kim Taylor were to the fore with two try scoring winger being pick of the day.

The Warriors now have 4 games remaining 3 of which are away with long journeys to Garioch & Oban sandwiching the final home game against current league leaders Heriots. 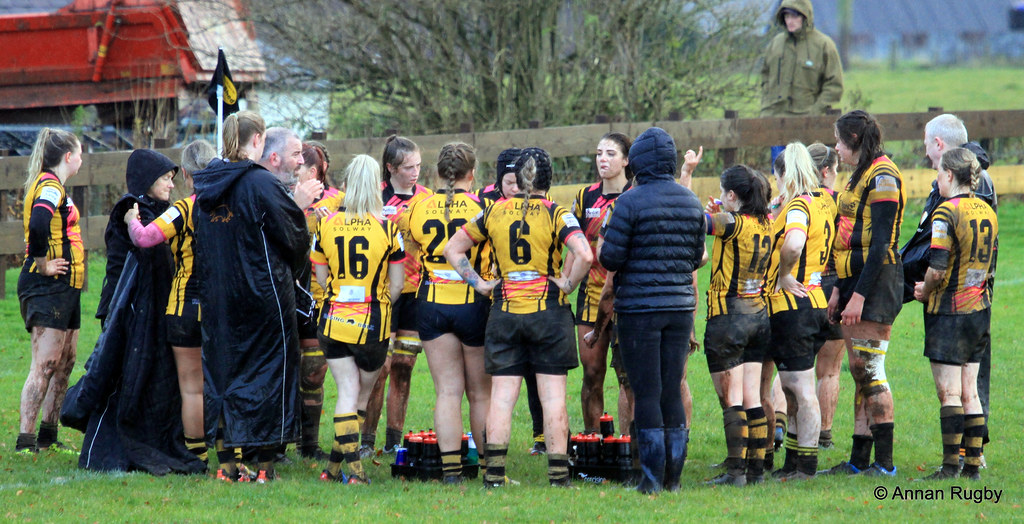