Following what seemed like monsoon type rainfall in the previous three days the Warriors took on Garioch Ladies on a rather soft n sticky Violetbank 2nd team pitch with the main pitch being unplayable.

Kim Taylor & Mally McGeoch were given the honour of leading the team out on what was the 50th appearance for the Warriors for both players. 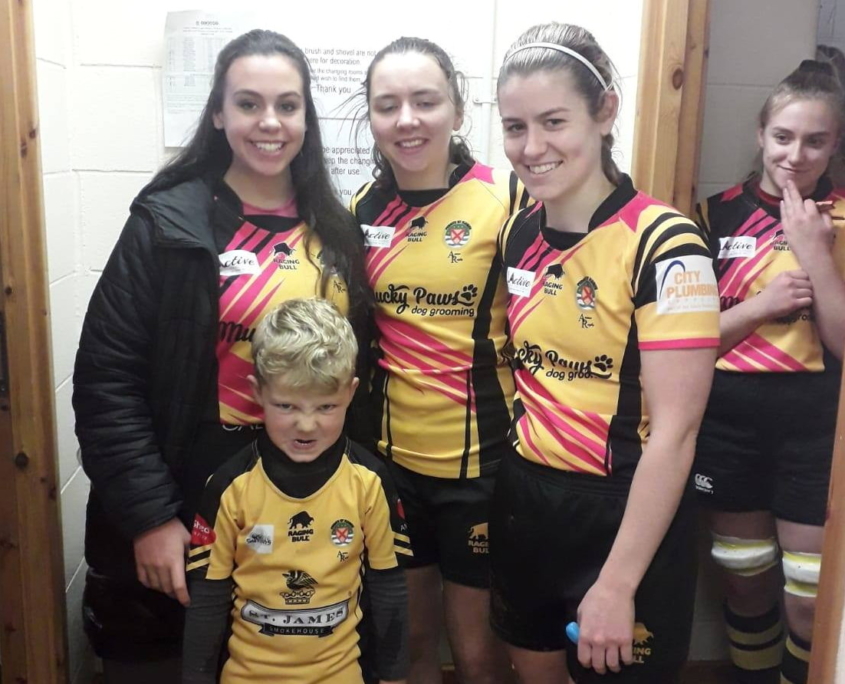 The game started at [ace with both teams dealing with the less than favourable conditions admirably. In the initial stages the away team having the upper hand with strong carries from their forwards making ground. Not to be out done when in possession the Annan players tried to build phases to attack the Garioch defence.

The opening 15 minutes went by with both teams going at it tit for tat in attack & defence when from a dropped passed just inside the Garioch 22 the Garioch fullback hacked the ball clear winning the footrace to kick the ball on before gathering again to score behind the posts, with the try converted. It could be said that this was 14-point turnaround with Annan spilling the ball when the line was at their mercy.

Not to be deterred straight from the kick off Annan attacked and pushed the opposition defence back time after time, being held put by some strong defence combined with some poor decision making from the Annan players who rather than move the larger Garioch pack about tried to barge over from close in. The ball being turned over or knocked on on several occasions allowing the Garioch team to clear.

From one of theses clearances the ball was turned over allowing Garioch to break upfield to score their 2nd score which once again was converted.

With the Warriors refreshed they took back to the field knowing that they were still in the game but getting the first score was crucial. The 2nd half started very similarly to the 1st with both teams trying to get the upper hand in the worsening conditions.

Unfortunately for the Annan team it was the visitors who struck first again from a spilled ball, it was booted clear for the Garioch fullback to race clear, offload out of the despairing tackle of Kim Taylor to score the visitors 3rd converted try.

So, with little more than 20 minutes to go Annan found themselves 21 points down but still well in the game. Annan threw themselves back onto attack with forwards Ashley, Lily, Nadine & Kayleigh carrying hard & the midfield of Chelsea & Ciara working well together. From a series of penalties, the ball was driven into the Garioch 22 better decisions were made allowing centre Chelsea Barnes to charge over with Mally McGeoch converting.

From the kick-off Annan tried to get back on attack but couldn’t quite hold onto the ball, allowing Garioch to gain possession & clear the pressure. Going into the final few minutes Annan continued to attack only for the ball to be spilled & Garioch to snatch possession move the ball wide for the winger to score in the corner bringing the game to an end.

Another valiant performance from the Warriors although disappointing that they couldn’t trouble the scoreboard more as has been the case in the last few weeks lots of positives can be taken but work ons of retaining the ball, building phases & decision making the main feature going forward.

Special mention to stand off Mally McGeoch & fullback Kim Taylor on their 50th appearance from a possible 54, also to new Warrior Bethany Lowery who made her debut.

Best for Annan in the forwards were Ashley Clark, Kayleigh Warrick & Lily Glendinning with forward of the match going to Nadine Barnes.

In the backs Nicole Barlow, Kirsty Barlow were to the fore with back of the match going to Ciara O’Connell.

Onwards again to next week with another home game against Oban Ladies when the Warriors will be hoping to get a well-earned win.