Following the disappointment of Scotland’s defeat to Japan in RWC 2019 all roads led to Violetbank for the Warriors game against Broughton Ladies.

The conditions were far from perfect following Annan’s own version of Typhoon Hagibis but both teams undaunted keen to get the game underway.

The game got underway with both teams making the best of the conditions firing headlong into each other with the slippy conditions & big collisions causing more than the normal errors.

It wasn’t until the 28th minute when the deadlock was broken when from a misplaced pass when Annan tried to run the ball from inside their own 22 that Broughton snaffled the ball to catch the Warriors unaware and score in the corner and take the lead.

From the kick off Annan recovered the ball & burst forward with forwards Nadine Barnes & Kayleigh Warrick carrying deep into the Broughton defence, when the ball was freed stand off Mally McGeoch broke the line with a show n go to be stopped in a last-ditch tackle by the opposition full back, with the ball recycled & driven close before 2nd row Megan Muir drove over from close range.

With no sign of the rain stopping, the 2nd half kicked off once again with both teams working hard in both defence & attack, the game following a similar pattern to the 1st half with Annan having the bulk of attack in the early stages without being able to convert pressure into points.

Broughton turned the tables and forced Annan to defend for long periods driving them back deep into their own 22 with Warriors winger Bethany Lowery making a try saving tackle in the corner before fullback Kim Taylor snaffling the ball in a ruck for Annan to kick clear, the kick bobbled & was knocked on by Broughton allowing Jane Stewart, returning to the team for the first time since the birth of her son, to hack the ball on several times towards the Broughton line only for the ball to bobble out to her path with the line at her mercy.

Annan pressed in attack and from a ruck close to the touchline scrum half Nicole sneaked up the blindside to commit the last defender & offload to winger Megan Ker to ran in to score, try converted by stand off Mally, to take a well earned 7 point lead.

Almost as if both teams had decided to take turnabout to attack Broughton pushed hard once more into the Annan half with their hard running forwards testing the Annan defence with the whole Annan forwards stepping up to the plate and repelling attack after attack and from another Nadine Barnes tackle the ball was turned over allowing Annan to kick clear. With the conditions worsening the ball became even more slippy & from a couple of errors the speedy Broughton winger burst up the wing & stepped inside the despairing tackles of centre Jane Stewart & fullback Kim Taylor to score under the posts.

Once again it seemed it was Annans turn to attack and from the kick off began to build phases and recycle the ball with good interplay from both forwards and backs, breaking up field from a kick by Mally the Broughton full back kicked it back looking for territory only for Annan hooker Linden Moffat to catch the kick on the full and return with interest. Again the ball was recycled and following a charge by flanker Lily Glendinning the Broughton defence transgressed with the ball being tapped & passed to 2nd row Nadine Barnes who drove over to once again give Annan the lead.

So going into the last couple of minutes Annan held a slender lead only to concede a final try to Broughton almost straight from the kick off to draw the teams level at full time.

All in all a fair result with both teams giving their all in not the best conditions. It has to be said though that both teams played some good rugby.

From a Warriors point of view some of the best rugby of the season was played & the never give up attitude throughout the team is coming to the fore.

A mention to Jane Stewart on her 1st game back having her wee one & also to Bethany Lowery & Jennifer McGregor playing only their 2nd game in Warriors colours.

Also thanks to the supporters who braved the elements to cheer both teams on.

Best for Annan in the forwards were Nadine Barnes, Lily Glendinning, Megan Muir who is improving with every game, with forward of the match going to Ashley Clark

Best in the backs were Nicole Barlow, Ciara O’Connell & Kim Taylor with back of the match going to Mally McGeoch.

This week sees the Warriors make the short journey up to Greenlaw to play local rivals the Stewartry Sirens.

Warriors and Broughton Ladies after the match 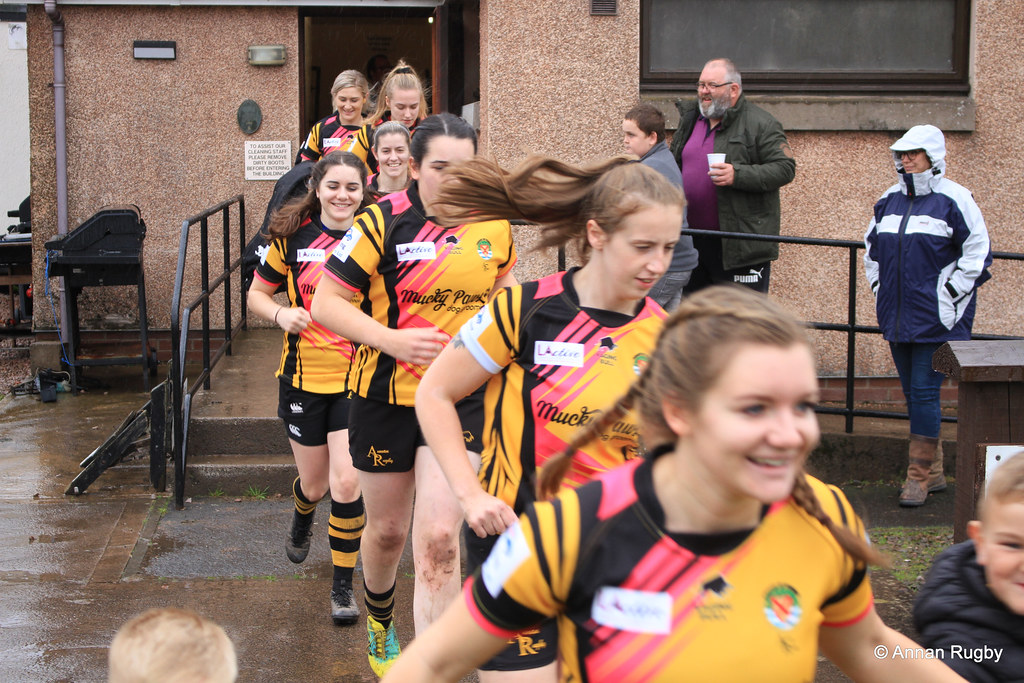