ANNAN WARRIORS AT THE MOFFAT TENS.

After what seems like a short break the Warriors took to the field for the 1st time in the 2019/20 season with a trip to local neighbours Moffat to take part in their annual 10s tournament. With a squad intent on getting valuable game time in their legs the decision was to try different combinations throughout the day.

First up group stages were local rivals Stewartry Sirens in what was expected to be a closely contested game. The game did not disappoint with both teams working hard in both attack and defence. With the games only being 10 minutes long there wasn’t much room for error & the Warriors were unlucky when from breaks from Abbie Clark & Chelsea Barnes couldn’t quite connect with the final pass to score.

Going into the final minute Stewartry turned the ball over & kicked the ball into space for their winger to chase, Annan’s Kayleigh Warrick chasing hard then managing to put in a try saving tackle, from the ensuing ruck the ball was recycled & Stewartry managed to score under the posts taking the tie 5 v 0

Not to be outdone and after a short break the Warriors took on Premier outfit Stirling County in their 2nd game, although this wasn’t their full squad, they were still expected to be a well drilled team. Annan started brightly and almost from the kick-off Correy Clark charged down a Stirling clearing kick to regather and romp in from 40 metres out.

This lifted the Warriors confidence and they continued to attack time after time only to be thwarted by the tenacious defence. After several attempts to drive over from close range the ball was moved for stand off Allana McWilliam to score beside the posts. Taking the final score to Annan Warriors 10 v Stirling County 0

With Annan’s remaining two games taking place on the main pitch the players had the opportunity to rest & watch their male counterparts.

Annan’s 3rd game was against Lismore Ladies with Annan buoyed by the improved performance in the 2nd game took to the field in confident mood. The Warriors were dominant throughout the game winning the game 17 v 0 with score coming from Nadine Barnes, Lily Glendinning & Allana McWilliam who also converted one of scores.

Slightly disappointingly a further two or three try scoring opportunities went begging due to forward passes when the backs strayed too flat in attack.

The final game of the group was against Oban Ladies with a place in the semi up for grabs. With the Warriors performance improving once more scores came at regular intervals with one for Kayleigh Warrick, 2 from Nicole Barlow & one from Allana McWilliam who also converted one.

So, into the semi-final the Warriors went against Stirling County with the Warriors on fire and playing some really good rugby. First on the score sheet was Abbie Clark who burst over under the posts after a few customary hand offs, 2nd to score was Allana McWilliam scoring her 3rd of the day, the final score which was try of the day went to Megan Ker with the ball being spread along the backs to winger Megan who took her opposite number on the outside before handing her off to score in the corner. The final score was Annan Warriors 15 v Stirling County 0

The final was a repeat of the opening match of the day with the Warriors taking on Stewartry Sirens for the 1st silverware of the season. The final was to be played over two halves so the Warriors new a good start was important & the 1st score as in the other games crucial.

As with the other games the Annan performance improved & the physicality in both attack and defence was noticeable. With strong carries coming from the Clark sisters & the Barnes sisters Annan surged towards the Sirens line, successive attempts from Abbie Clark & Kayleigh Warrick were stopped short for the ball to be recycled & Correy Clark break a tackle to score. The remainder of the half Annan continued to press but were held out by the Sirens staunch defence.

Knowing the start of the 2nd half to be crucial Annan kicked deep to pressurise the opposition and put trust in their strong defence. From a Stewartry knock on, on the edge of their 22, Captain Nicole Barlow seized on quick scrum ball to nip up the blindside to squeeze in to score despite a despairing last-ditch tackle from the Stewartry stand off. With still 5 minutes to go it was important that the Annan players kept focussed.

Unfortunately stand off Allana miscued her kick-off giving possession to the opposition who attacked quickly and from a quick ruck broke wide to score in the corner. The tension rose with only a couple of minutes to go & both teams making their final efforts to win the game. With Annan controlling the ball and carrying hard into the Stewartry territory a quick offload to speedster Kirsty Barlow gave her ample space to round her opposition winger to race to the posts for the winning score which was converted by stand off Allana.

Special mention must also go to Warrior Lily Glendinning who was voted Player of the Tournament by the match officials.

All in all, a good day out with the plan at the outset of getting good game time achieved, the hard work at preseason evident but still lots to work on in the remaining weeks before the league commences on 18th August. 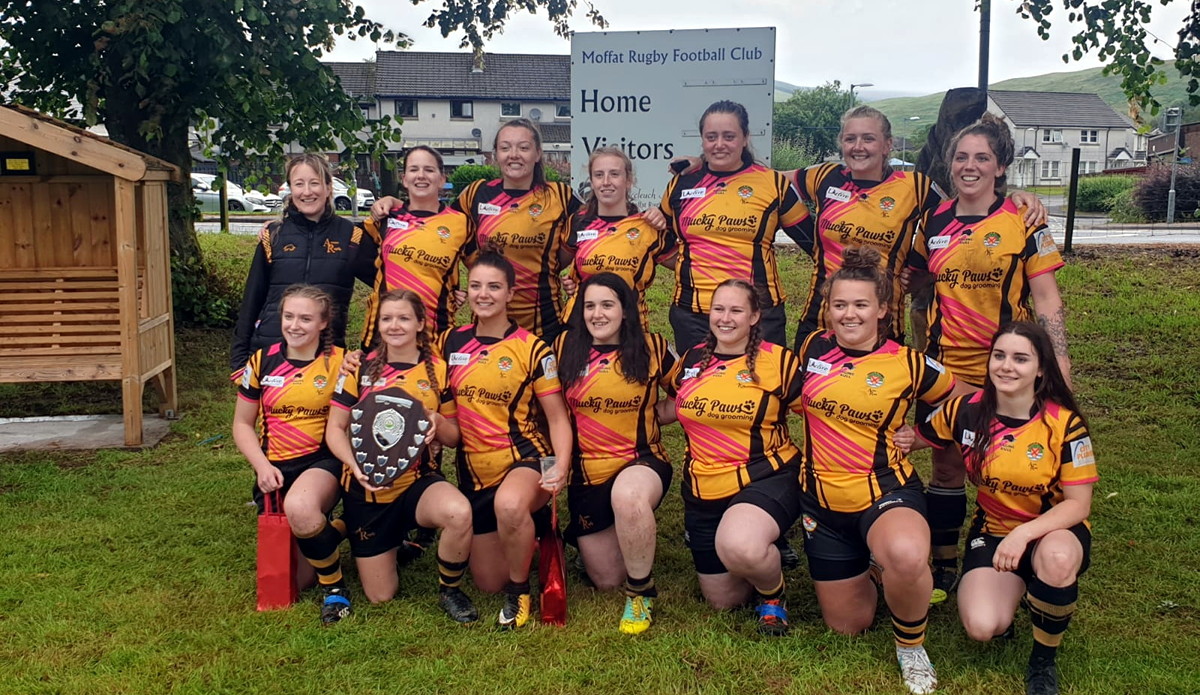