The Warriors took to the Violetbank pitch last Sunday for their first league match in 6 months to take on Bishopton Ladies.

The Warriors are in a rebuilding stage this season with a number of experienced Warriors hanging up their boots in the close season.

As a result, of the squad of 19, seven Warriors made their competitive debut during the match.

Onto the match, it was the Warriors who struck first through Captain Nicole Barlow who scored a great team try in the corner after just 2 minutes to give the Warriors a 5-0 lead. The conversion was missed.

It was Nicole who was scored again just 10 minutes later with a classic scrum pick up and dummy to get through to the Bishopton Ladies defence.  The conversion was missed.

It was Bishopton Ladies who were next on the scoresheet as their full back ran all they way from their own 22 to score a converted try under the posts. 10-7 to the Warriors after just 15 minutes!

The scoring slowed down slightly as both teams tried to run the ball at every opportunity but handling errors stopped the flow of the match.

It wasn’t until on the half hour mark that the next points were on the board, and who else, but Captain Nicole with her hat-trick try. Similar to the 2nd try, it was a pick up and go but this time by number 8 Holly Clark who popped a pass to Nicole who dummied her way past the Bishopton defence. The conversion was kicked to the biggest cheer of the day.

Bishopton Ladies ended the half strongly and were rewarded with a try after a lineout near to the Warriors try line.

Not long after the half started, a well worked team passage of play from the home sides 22 to the opposing 22 resulted in Ellie McCormick crashing over the whitewash for her first try for the Warriors. It wasn’t to be her last.

Captain Nicole was next on the scoresheet once again after a usual barnstorming run by Chelsea Barnes up the sidelines resulted in the perfect pass for Nicole to score under the posts. 27-12 to the Warriors.

Ellie McCormick grabbed her brace try after a the ball was moved though numerous Warriors hands and Ellie bust through from the halfway line to score.

Bishopton Ladies did get onto the scoresheet again near the end with another rumble over the try line but the Warriors had the last word when Ellie McCormick grabbed her hat-trick try in the last phase of the match. Another great team try with the ball going through the majority of the team.

A great start to the season with a lot of positives but also some areas of the game to be worked upon,

Best on the day were Megan Muir in the forwards and Captain Nicole in the backs.

The Warriors have another home tie on Sunday against old rivals and friends Oban Lorne Ladies,

Oban had a great win last Sunday so it’s actually a top of the table clash, albeit after only 1 match. Could be one of the toughest matches of the season for the Warriors. kick off 2pm 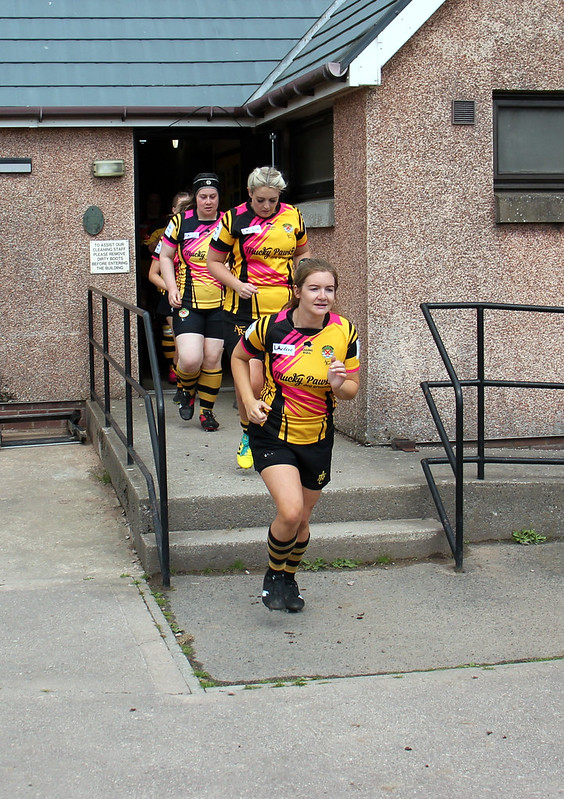