At a dry sunny windless Violetbank on Saturday the hosts Annan and visitors Stewartry served up a hard gritty 80 minutes of uncompromising rugby in West 1 of the Tennents Regional Leagues (combined with the first leg of the Chisholm Cup).

For the first 20 minutes Annan had the better of the action keeping up a sustained attack in the visitor’s half for long periods but their attacks were well marshalled by a well organised Stewartry defence.

Annan’s pressure did pay dividends, however on the 10 minute mark, when the visiting forwards were penalised for handling at a ruck in front of the posts and full back Josh Whiteside slotted the 3 points. 5 minutes later the visitors hit back when their wing forward latched onto a speculative pass from his scrumhalf to sprint in from the 22 to score in the corner. The try was unconverted.

Annan looked to have crossed the whitewash when from some dynamic driving play from the home forwards prop Ryan Hetherington drove over from close range but the ball was deemed to be held up.

From the ensuing scrum the visitors were penalised and Josh Whiteside added a further 3 points to take Annan into a slender 1 point lead into the half time break.

The second half continued in a similar manner to the first with both sides playing some entertaining rugby but both unable to break down each others defences. It was the visitors who broke the deadlock when, on a drive towards the Annan line the hosts gave away a penalty which was gratefully accepted by the visitors enabling them to take the lead for the first time in the game (6-8).

Annan had their chance to retake the lead when awarded a penalty for a ruck infringement just inside the visitor’s 22 but Josh Whiteside’s kick just faded past the upright.

Going into the final quarter of the game with both teams battling for the win Annan gave away a penalty inside their 22 which the visitors kicked to the corner. From the ensuing lineout Stewartry drove the ball towards the line and from a ruck the ball was spun out to ta lurking forward who crashed over to score.

With the conversion missed and the points difference 7 points Annan immediately took the game into the visitor’s 22 and when awarded a penalty which led to a lineout 5 metres from the line they drove towards the line but unfortunately were penalised and the game was over.

A disappointing result for Annan who are winless after 3 league games and a Shield encounter and are now in bottom place in the league. Congratulations to Stewartry who, after winning at Violetbank a fortnight ago for the first time in 15 years, also racked up their first double over their hosts.

This was an entertaining game of rugby played in great spirit by both teams. However this was the first time Annan were unable to cross the whitewash in some considerable time.

Annan on the attack 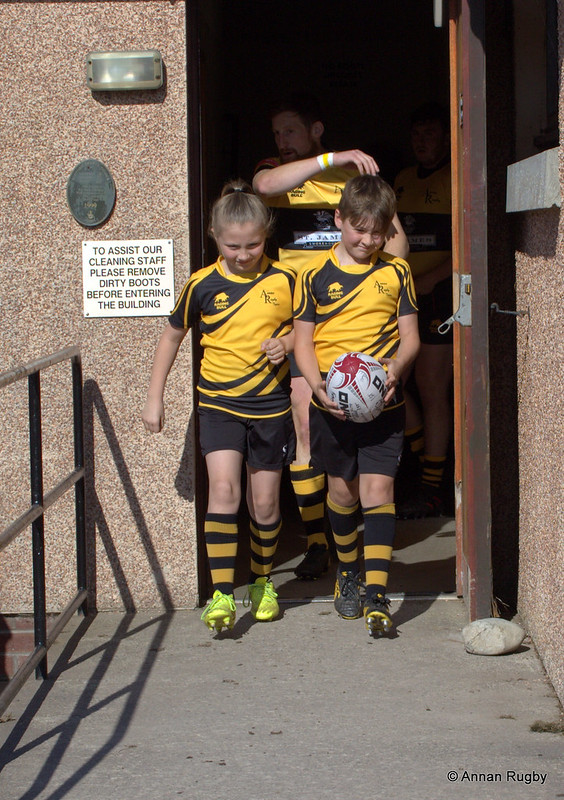