Annan welcomed Lenzie to Violetbank on Saturday in their latest West 1 fixture in the Tennent’s Regional Leagues. Annan were currently in 7th place in the league with Lenzie in 3rd place, pushing for a promotion place. A hard battle was envisaged with Annan having found some form of late and coming off a win the previous Saturday against Strathendrick.

The pitch at Violetbank was a little heavy after the overnight rain but both teams seemed in a mood to play expansive rugby and with both sides’ defences looking well organised the battle for ascendancy was played in the main between the 22’s as each side played some hard abrasive rugby.

Annan made the breakthrough well through the first half when from a series of rucks and driving plays by both forwards and backs saw No 8 Sean Haren drive over to score despite the attentions of a couple of Lenzie forwards. Stand off James Bigham failed with his conversion attempt.

Both teams continued playing some extremely attractive rugby with Annan having the balance of possession during this time. But it was the visitors who struck just before half time with a well taken penalty award which saw the teams reach half time with game finely balanced at Annan 5 Lenzie 3.

The second half started in a similar vein to the first as both, evenly matched, teams tried to gain the ascendancy. Again most of the play seemed to take place between the 22s with occasional breaks into the opponent’s 22 by both teams. The series of plays by both sides had both sets of supporters on the edge of their seats, if they had had any! As time passed and with neither team on top the Annan support anxiously wondered if their team could hold on to win!

With around ten minutes to play it was the visitors who broke the deadlock in scoring when from an attack down the left wing and from a ruck the ball was spun out through their backs for their outside centre to evade Annan’s midfield defences to score a fine try. With the conversion added the visitors held a 5 point lead as the game entered the final minutes.

Most home supporters feared the worst and were resigned to Annan getting a least a losing bonus point for their efforts but they had not reckoned that their team were fired up and determined to get a bigger reward for all their effort put into the game up to this point. Annan launched a final series of attacks on the Lenzie line.

From a lineout the ball was driven, firstly by lock Michael Thompson and then by Sean Haren, followed by hooker Kieron Warrick, a blistering run by winger Logan Johnstone up the line following a beautifully flighted overhead pass by lock Tam Sloan, and from the final ruck Kieron Warrick set up a maul on the 5 metre line and prop Ryan Hetherington ripped the ball and crashed over for a splendid try to tie the scores at 10 all.

James Bigham stood up to take a difficult conversion from the left touchline and with both sets of supporters holding their collective breaths he calmly slotted the ball between the posts and with the referee blowing for time the celebrations began. One could have been forgiven for thinking that Annan had just won the league such were the size of the celebrations which ensued.

Without doubt this was Annan’s finest display of the season so far with all the players playing their part in this fine win. Annan’s defensive work was outstanding throughout the full 8o minutes despite Lenzie crossing the whitewash once. In attack both forwards and backs combined well creating chances to score only to be denied by some exemplary defensive work by the opposition on several occasions.

Annan are still in 7th place in the league but are now 9 points clear of the bottom three clubs but have two massive games before the Christmas break starting with a local derby next Saturday away to Stewartry (3rd) at the Greenlaw and then a fortnight later away to promotion favourites Allan Glens (2nd) at the Bearyards. 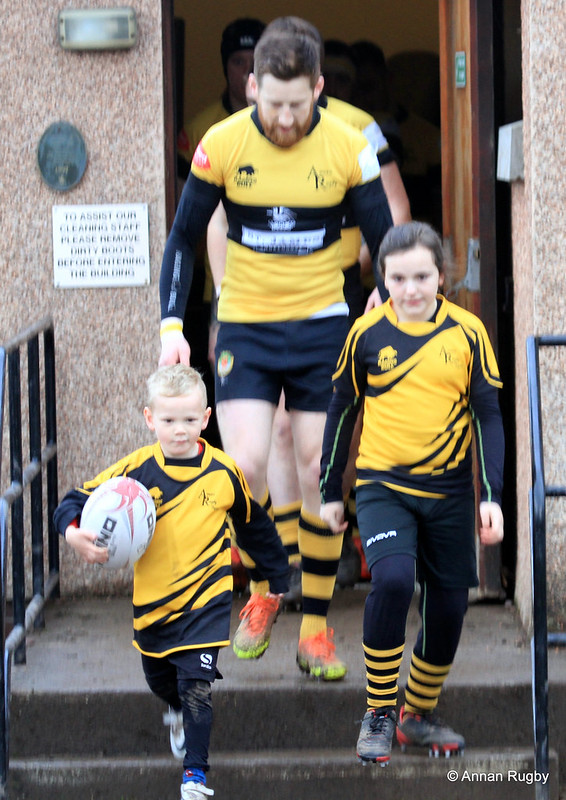 The 2 Annan tries from Sean Haren and Ryan Hetherington and Lenzies try from today’s West 1 match at Violetbank. And a wee winning conversion from James Bigham.