With Garnock lying mid-table and Annan 3rd bottom in West 1 of the Tennent’s Regional Leagues this was always going to be a close battle and so it proved.

Annan started well, driving play into the visitor’s half but were well marshalled by the Garnock defence. In their first foray into home territory Garnock were awarded a penalty for a lineout infringement which the visiting standoff gratefully accepted.

Minutes later Annan were 6 points behind when penalised again, this time, for a ruck infringement. Annan, varying their attacks from forward surges combined with attacks through their backs, were causing the visitors problems.

When awarded a penalty in front of the posts Annan spurned the 3 points and launched an attack through forwards and backs with centre Alex Halliday crashing over for the try. Standoff James Bigham added the conversion and the hosts held a single point lead. The slender lead didn’t last long, as Annan once again were penalised again for a ruck infringement. Annan 7 Garnock 9.

Garnock further extended their lead when their outside centre scythed through some hapless home defences to score under the posts. The conversion was missed.

From the restart Annan drove play deep into the visitor’s half and were rewarded with a penalty in front of the posts which was missed!

James Bigham redeemed himself minutes later when No 8 Sean Haren made a great bullocking drive into the visitor’s 22 and from the ensuing ruck Bigham put in a deft kick over the heads of the Garnock defensive line with wing forward Callum Bell winning the race to the line to score. An apt reward for the wing forward on his 200th appearance for Annan’s 1st XV. With the conversion missed this took the half time score to Annan 12 Garnock 14.

Annan started the second half brightly with the forwards driving play deep into the Garnock 22. Annan were rewarded with a penalty. From the ensuing lineout, in a planned move, the ball was shipped through various hand to prop Ryan Hetherington coming into the line, who sidestepped his way to score. The conversion was missed. Annan 17 Garnock 14.

Annan continued to dominate possession and territory but were unable to build on their numerical advantage when one of the Garnock props was yellow carded. Despite some excellent attacks by the hosts they were unable to break down the well organised visiting defences.

As time petered out it looked as if Annan were going to hold on for a hard fought victory but it was not to be. In the dying moments of the game Garnock were awarded a penalty and from the following lineout the ball was popped up to their inside centre who ran in to score under the posts. As the conversion was taken the whistle went to signal the end of the game.

This was a game Annan deserved more than a losing bonus point especially considering they had outscored their opponents by 3 tries to 2!

They have improved in every game since the start of the season and the wins will come. Despite toiling initially in the set piece scrums the Annan forwards put in an impressive performance over the 80 minutes with No 8 Sean Haren the pick of the forwards.

The backs are beginning to gel into a fine attacking force led ably by captain and scrum half Andrew Jancey with centre Alex Halliday showing his experience over the 80 minutes.

In the words of Warren Gatling ‘the best team lost’. 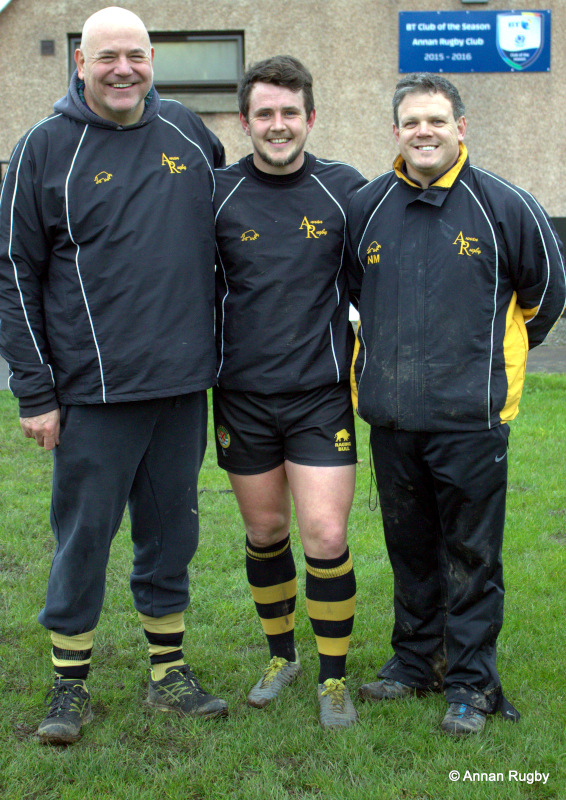 Alas there are none – camera broke!

The 3 Annan tries from Alex, Callum and Ryan