On Saturday 27th August, at a Violetbank resplendent in sunshine Annan 1st XV welcomed Carrick 1st XV for the opening game of the 2022/23 season in the National Shield competition.

The game being a good introduction to the new season for both teams prior to the rigours of the league campaign which commences next weekend.

The first quarter of the game was a keenly contested affair with both defences being on top, the only scoring being a long range penalty by Carrick to give them a 0 -3 lead.

This spurred the new combinations within this young Annan team to up the tempo and after some good interplay on the right hand side of the field, outside centre Aaron Carmichael burst through the visitors line to score under the posts.  Josh Whiteside adding the conversion.

With Annan now starting to gain their ascendency, it was in fact the visitors who scored a converted try against the run of play, when with the Annan back line having a clear sight of the Carrick line, the final pass was intercepted for an easy run in under the Annan posts.

Annan’s lead was further extended a few minutes later by number 8 Ollie Ferdinand, who scored a fine individual try from the half way line, running over and dunting no less than 5 Carrick players enroute to score under the posts in the type of run the late great Jonah Lomu would have been proud off.  Whiteside again adding the conversion.

In what was turning out to be a great entertaining cup tie for the Violetbank crowd, both teams commenced the second half with the same effort and zeal they had shown in the first half.

Annan starting the slightly sharper of the two teams and this brought dividends a few minutes later when after some good interplay the ball was put through the hands to number 8 Ferdinand who was lurking out wide right and he was able to burst through the Carrick defence and run round behind the posts for the opening score.  Whiteside again adding the conversion.

Ferdinand was then yellow carded for an interaction with a Carrick defender after his score, reducing the home team to 14.

Carrick then capitalised on this and pressed hard at the Annan line which was eventually broken when they scored a further converted try, to reduce the deficit to 4 points.

The 14 men of Annan however did not take this lightly and from the kick off they took the game to the visitors and again some excellent interplay released Aaron Carmichael, who burst through the Carrick line, outstripping the cover defence for his 2nd of the game.  Whiteside again converting.

With Annan now back to 15 and not to be outdone, Carrick came back again at the home side and after a further period of pressure again reduced the deficit with a further converted try.

Annan then increased the tempo and intensity and after a Carrick infringement just outside their 22, they were awarded a penalty which was duly slotted between the posts by Whiteside.

Further pressure on the Carrick line following the kick off, saw again a good period of sustained possession by the home side who went further ahead when the ball was zipped through several sets of hands to winger Ben Conroy who scored wide left.  This was unconverted.

A few minutes later Aaron Carmichael scored his hattrick when he was again set loose after some good interplay to score an unconverted try to the right of the posts.

Not to be outdone however in the final minutes Carrick mounted some further attacks against the home line, which were repelled by the Annan boys until the final whistle.

What an entertaining and cracking game to start the new season and credit should be given to both teams who both played expansive open and attacking rugby at every opportunity.

A good display by the young home side with some new positional changes and pairings starting to bed in and bear fruit following pre season.

Best for Annan on the day were the excellent back row of Gray, Armstrong and Ferdinand in the forwards and in the backs, Sean Haren, who had a good game in his new role at inside centre, with Josh Whiteside also becoming more influential and showing increased maturity at 10.

Man of the match was the hattrick hero, Aaron Carmichael, who seems to be relishing the time and space he has to operate in, at outside centre, where his speed can be devastating on the opposition defence. 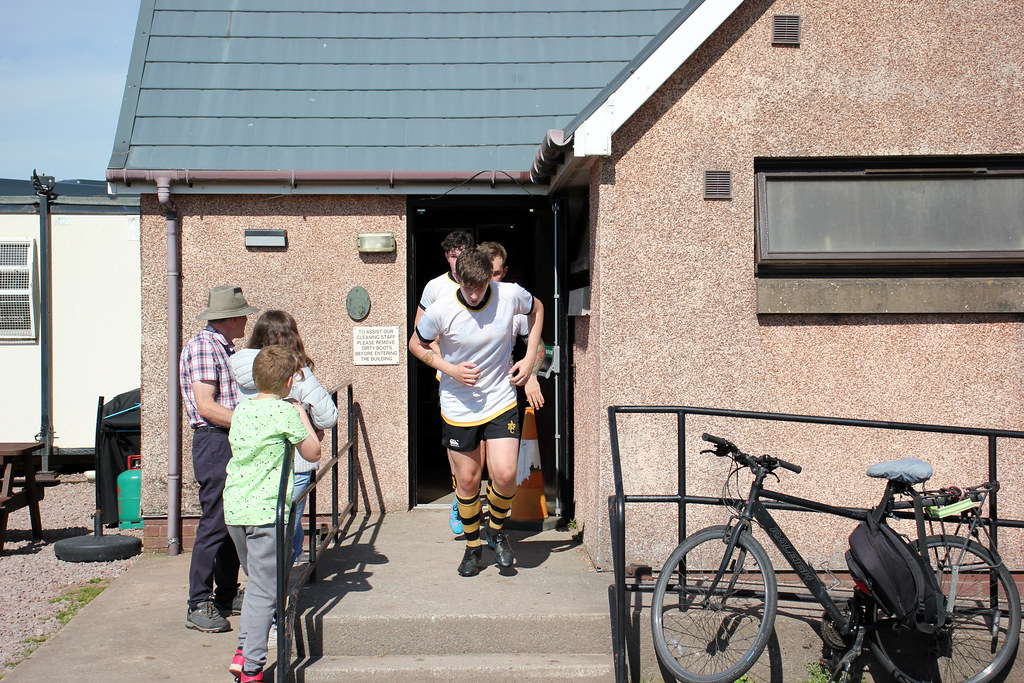 Alas the match was not filmed