Annan took to the field of play at Violetbank knowing that their future in West 1 of the Tennant’s Regional Leagues was on the line. A win was vital against Cambuslang, currently bottom of the league, if West 1 rugby was to be played at Violetbank next season.

The team was led out on Saturday by Neal Coupland who was making his 100th appearance for Annan 1st XV.

On a dreich wet Violetbank pitch, with the wind blowing the persistent ‘mizzle’ across the pitch making play difficult in the muddy conditions. Both teams, to their credit, made the best of the conditions and played strong running aggressive rugby.

It was the home team who scored first when from a Cambuslang lineout the ball was deflected by lock dan Norden into the hands of prop Callum Bell who made a great break into the visitor’s 22 and when he was stopped the ball was recycled quickly out to winger Finlay Laurie who made further inroads into the 22 and the ball was again quickly recycled inside to No 8 Sean Haren who looked as if he would score but he unselfishly passed to lock Neal Coupland who score at the side of the posts to take his 1st XV try tally to 24 on his 100th appearance. Stand off James Bigham added the extras.

Annan’s second try wasn’t long in coming when from a fine handling run by the backs the ball was transferred to No 7 Brandon Thomson who looked to have scored but the referee deemed that the ball was held up. From the ensuing scrum 5 metres from the Cambuslang line the Annan eight drove towards the line and No 8 Sean Haren drove over the visitor’s scrum half to dot the ball down. James Bigham again added the extras.

Cambuslang fought back and their standoff intercepted an Annan pass to sprint in under the posts and score a converted try. This seemed to act as a catalyst to the visitors as towards the end of the half their forwards battered away at the Annan line. Annan’s defence was magnificent as they contained the visitors attacks and when the ball went loose in a dynamic tackle it was hacked on down the pitch and when it rolled over the line Annan scrum half Aaron Carmichael was unlucky when it looked as if he had managed to touch the ball down but was denied as the referee was unsighted. This act brought the first half to a close.

The second half was 5 minutes in when from a penalty award and the ensuing lineout No8 Sean Haren drove into the visitor’s 22 in concert with lock Dan Norden set up a ruck which set up a series of driving rucks towards the Cambuslang line with that man Neal Coupland grabbing his 2nd try of the match and 25th of his 1st XV career. The conversion was missed.

For the remainder of the half Annan put their supporters through the mill as their discipline, not for the first time this season, let them down. They gave away a series of penalties which, luckily for the home side, only two were within the visitor’s kickers range which he kicked to take the score to Annan 19 Cambuslang 13.

The last quarter of the match was a tense affair as the visitors attacked at every chance to get the win. Annan’s defence stood up well and they set up several encouraging attacks of their own to try and score the bonus point try but were unable to get across the whitewash and finished the half strongly.

This was a much better performance by Annan to give them their first win of the new decade. Several players caught the eye none more so than three player in their first season in the 1st XV – wingers Finlay Laurie and James Park along with scrum half Aaron Carmichael. Amongst the more senior players Sean Haren and that man Neal Coupland were outstanding in the forwards.

Man of the Match: Neal Coupland 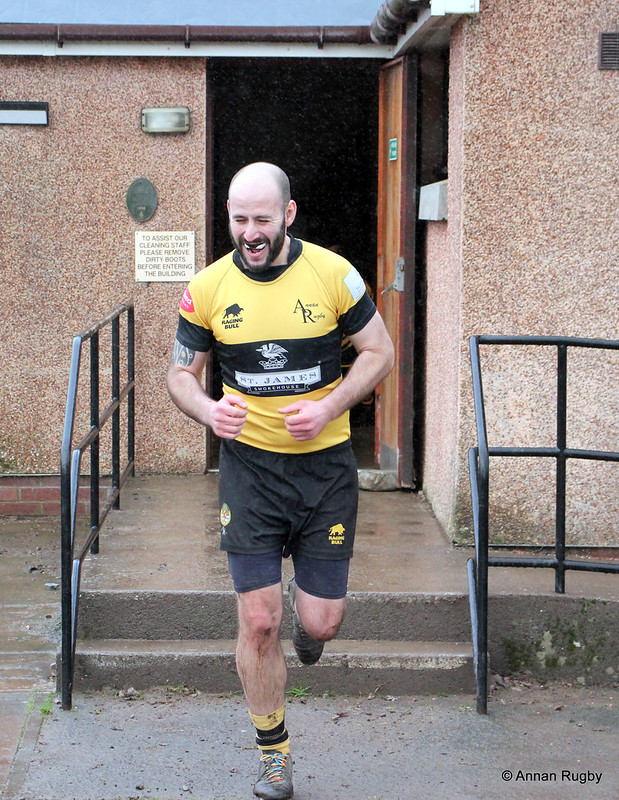 The 4 tries the match. 3 from Annan from Neal Coupland (2) and Sean Haren plus the Cambuslang try