With league leaders Allan Glens playing the bottom club Annan (Editors edit: I prefer 10th top….) looking like a foregone conclusion only the most ardent Annan supporter felt their side had a chance in this West 1 encounter of the Tennent’s Divisional leagues. The home team had other ideas and although beaten at the end of the day they played their socks off in a thrilling encounter at Violetbank on Saturday.

From the whistle the home side set out their stall and immediately took the game to their visitors from Bishopriggs and kept play, for long periods, in their opponent’s half with some excellent driving play from the forwards who linked up well with their back division. Their efforts were rewarded in 5 minutes when they were awarded a penalty which full back Josh Whiteside gratefully slotted.

Annan’s lead was short lived however when from their first real attack the visitor’s launched an attack down the right wing for their winger to score an unconverted try in the corner.

From the restart Annan won possession at a ruck and launched an enterprising attack which broke down in front of the posts when Glens were penalised. When everyone thought that Annan would kick the penalty the hosts instead took a quick tap penalty and, with the ball whipped out to the left, full back Josh Whiteside, coming into the line, crashed over for an unconverted try at the corner flag and the hosts were back in the lead 8-5.

It looked as if Annan would hold on to the lead up ‘till half time only for their hopes to be dashed when the visitor’s launched an attack, aided and abetted by some fragile defending, which resulted in Glens once again breaching the whitewash with an other converted try. (8-12).

But worse was to come, when from the restart the ball went directly into touch and from the ensuing scrum on the half way line the visiting No 8 picked up from the base of the scrum and danced his way through some hapless tackles to score another converted try taking the half time score to Annan 8 Allan Glens 19.

With the home support expecting the worst in the second half Annan, however, opened the half with some positive expansive rugby and within minutes from a ruck in the visitor’s 22 the ball was whipped out through the backs for Josh Whiteside, who popped up on the wing this time, to score in the corner. He failed in his conversion attempt. (13-19).

Annan kept up their attacks in the visitor’s half and before long they had reduced the visitor’s lead to a single point. Again from some enterprising interplay between forwards and backs the hosts kept play in the visitor’s half for considerable periods of time. From a ruck, following a lineout, on the left side the ball was played through several pairs of hands to the right winger Logan Johnstone who, with some work to do, forced his way over the line to score his first try for the 1st XV.

Into the final 10 minutes of the game, with both teams playing for the win, and playing some enterprising open rugby, Glens increased their lead to four points when they were awarded a penalty in front of the posts.

As time was running out for Annan they threw everything into the game in an attempt to get the vital score. In the final minutes of the game it was the visitors who gained the vital score to give them a bonus point 4th try and deny Annan at least a bonus point. The ball was turned over by the visitors in the Annan half and the visiting No 11 wove his way through several Annan defenders to score under the posts. As the conversion sailed through the posts the final whistle sounded.

Despite the loss Annan can take a lot from this game as they played some fine rugby and it is only a matter of time before the wins come. The forwards put in a power of work with No 8 Sean Haren and lock Michael Thompson making inroads into the opposition at every opportunity.

Pick of the team must go to the two youngest players and try scorers full back Josh Whiteside and winger Logan Johnstone who had outstanding games which bodes well for the club especially as several young players are making their mark in Annan’s 2nd XV this season.

Logan with his try 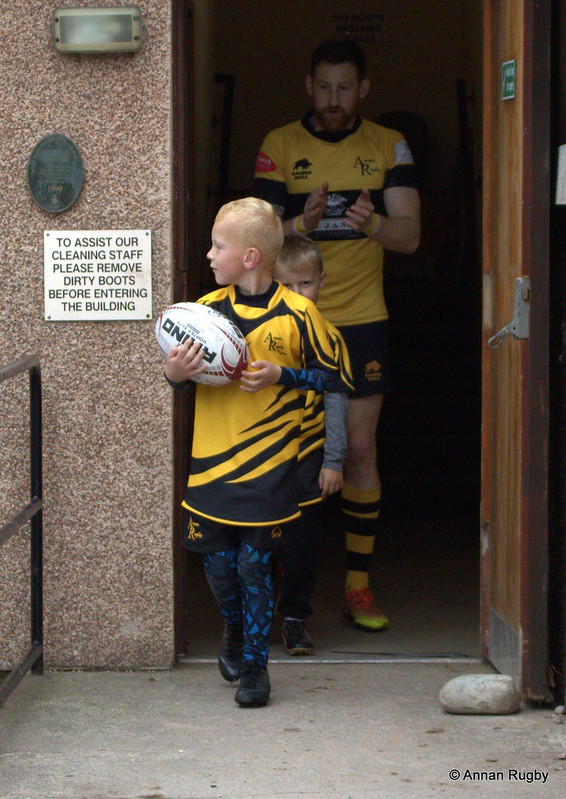 The 3 Annan tries from Josh (x2) and Logan