On Saturday 26th March, Annan 1st XV entertained Allan Glens 1st XV in a hastily rearranged Tennent’s West Regional League Division 1 fixture  at a sunny and warm Violetbank.  Both teams original league opponents having called off the previous day due to Covid in their respective Squads.

Prior to kick off a minutes silence was held in memory of former Club Secretary Delna Weston who had sadly passed away earlier in the week.

Following a hard fought win against East Kilbride the previous week Annan hoped to give a good account of themselves against  the only unbeaten team in the Division.  More so when when taking into account this was the visitors first outing in 9 weeks.

Alas this was not to be the case and after a promising and competitive start by Annan after 30 minutes Glens began to exert control of the game racing into a 8-38 lead at half time.   Annan’s scores coming from a well worked Josh Whiteside try and a penalty also converted by the same player.

In the 2nd half Glens again had total control scoring a further 4 tries and the casual observer may have formed the impression it had been the home side who had not played competitively for 9 weeks rather than the visitors.

Congratulations to Allan Glens who were worthy winners on the day and although they have a backlog of games must be one of the favourites for promotion.

Although Annan were yet again much changed due to injury and illness, at times the gulf in skill and mindset was palpable and could not be attributed to squad disruption alone.

On a plus note Annan’s set piece was solid and they even stole a number of balls from the visitors in the line out, however despite this they were unable to make any impact on the visitors defensive line apart from the well worked Josh Whiteside try.

Too many times being devoid of enterprise or kicking away possession when other options were available.   Unlike the excellent defensive display the previous week, on this occasion the home side were found wanting in that area, with too many missed tackles, poor communication and no cohesiveness.

Another bad day at the office for Annan and it is hoped the boys can get a bit of momentum together for the remaining league fixtures with the option of finishing in the top four still a possibility if bit of consistency in the squad can be achieved.

Best for Annan on the day we’re Michael Thomson, Fraser Hope and Nick Graham in the forwards, with Adam Torbett, Aaron Carmichael and Josh Whiteside being the pick of the back division. 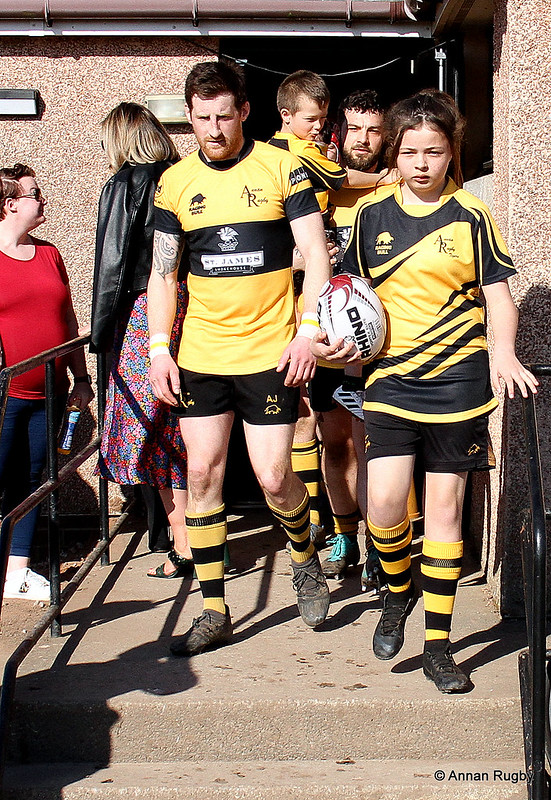 Unfortunately the match was not filmed. Get well soon Billy!