ANOTHER BUSY WEEKEND AHEAD

After mixed fortunes for the teams last weekend, 11 Annan teams are raring to get back into match action  including the three P1-P7 Tiger squads who have their first matches of the new season and the 2nd XV who are off to Marr to start their league campaign.

Best of luck to all the teams. 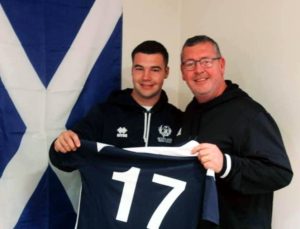 And a busy weekend again Finley McCartney as Finley has once again been called up to the Scotland U20 Rugby League squad taking on England this weekend at St Helens.

Congratulations Finley once again from all at Annan Rugby.

1ST XV IN LEAGUE OPENER AWAY TO CAMBUSLANG

On Saturday, the 1st XV will hopefully start their 2021/22 league season after their league match last weekend versus East Kilbride was postponed

The Annan lads will have been encouraged with their great win last Saturday in a quickly rearranged friendly match versus Wigtownshire.

Matches against Saturdays opponents Cambuslang have in the last 5 years been very evenly matched. In fact the last two league trips to Coats Park have been 27-27 and 28-28 draws while the previous Shield match was a 25-24 win to Annan.

Cambuslang just lost their opening league match v Strathendrick 23-22 in the last play of the match so will be no doubt wanting to get back to winning ways but Annan will of course be wanting to start their 2021/22 league campaign (the first league match for 555 days!) off to a flyer.

Kick off: 3pm at Coats Park

Just like the 1st XV, it’s been a while since the last league match for the Annan 2nd XV.

The 2nd XV lads are off to Marr 3rd XV on Saturday. Marr has never been a happy hunting ground for Annan with their last encounter back almost 2 years ago ending up in a 33-22 win for Marr but confidence in the 2nd XV squad is high and the team will be hoping to start like they tend to do ever league season with a win.

The problem thereafter is 2nd XV matches tend to get cancelled as opposing teams drop out/fail to get players numbers but fingers crossed this season the 2nd XV leagues will have all their fixtures fulfilled. We are always being told player numbers are up! So let’s hope so!

With over 50 senior men attending pre-season training though they are at Annan and competition for the 1st and 2nd XV spots has not been this competitive for quite a number of years.

Kick off: 3pm at Fullarton Park

U18 BOYS HOST GALLOWAY ON SATURDAY

The U18 Boys have their first home match of the season when they host the combined Stewartry/Newton Stewart U18 boys on Saturday at Violetbank.

The lads had a tough start last week against East Kilbride/Cambuslang but will be aiming to bounce back against the newly formed Galloway team.

Game kicks off at 2pm at a big Annan support would be most appreciated.

WARRIORS AT HOME AGAIN ON SUNDAY

The Warriors will be wanting to get back to winning ways after their loss to the Sirens last week.

Against Howe, the Warriors have had a decent record at Violetbank with 2 wins and a draw in their four previous encounters. The last being in October 2019 when the teams drew 15-15 in a 6 try thriller.

The Warriors had a number of players injured last weekend to add to the couple of players already on the injury list, but numbers at training are still up and a strong Warriors side is still on the cards for Sunday.

If Vice Captain Kayleigh Warrick plays on Sunday it will be Kayleigh’s 50th appearance for the Warriors in a competitive (league/cup) match since here debut in the Warriors first match is 2017. Congratulations Kayleigh.

A big Warriors support would be most appreciated.

Kick off at Violetbank: 2pm

STOP PRESS: The U14 Boys match has been cancelled as both Annan and Carrick have too many players unavailable.

The U14 and U16 Boys are both on the road this Sunday as they continue their West Development league fixtures.

While the U16 Boys are off to Moffat, the U14 Girls are hosting the U14 Moffat Girls at Violetbank on Sunday.

The girls will be aiming to put on the great rugby to delight the Annan fans as they always do when playing at Violetbank and away for that matter.

With the Warriors also kicking off at 2pm at Violetbank, a great day of womens/girls rugby for you to watch and support. What better way to spend a Sunday afternoon!

In the old last but by no means least spot are the mighty P1-P7 Tigers who travel to Stewartry for their first series of matches of the new season.

With over 85 P1-P7 Boys and Girls attending training last Friday, playing numbers have never been higher and all will be raring to go on Sunday to show off their rugby skills at the Greenlaw.

Parents and players to meet at 10.30am for the 11am start

Best of luck to all the teams in action this weekend