THE 1ST XV STEADY THE SHIP

The 1st XV took to the Violetbank pitch to take on Cambuslang knowing they had been dragged back into the relegation battle after 3 straight defeats and not knowing if 1, 2 or even 3 teams could go down at the end of the season. A win was a must as it was for bottom placed Cambuslang.

I say 3 as not sure if there’s league reconstruction again at the end of the season? – Anyone know?

But what a start for the lads, as Neal “Club 100” Coupland, in his 100th appearance for the 1st XV, romped over for an early opening try. Bingo Bigham with the conversion and 7-0 to Annan in as many minutes.

It got better as 10 minutes later it was 14-0 with returning and 3rd best rugby player in the Haren/Stewart household, Sean crossed the whitewash. James again with the conversion. 14-0

Alas it then got a bit worse as just a few minutes later, a loose pass and Cambuslang were on the scoresheet with an interception try. 14-7 after 25 mins played.

Despite chances, it remained 14-7 at half time. Big second half required to hang onto the much needed points.

For the first 10 minutes, twas nip and tuck but like the first half the mighty Coupland popped up to score his 25th try for the black and amber and 2nd try of the match and it was 19-7 to the lads.

So could Annan a) hang on for the win, b) win plus try bonus or would Cambuslang get back into the match and perhaps c) get the win?

To the joy of the Annan players and supporters it was a) but was almost c) – it finished 19-13. Cambuslang being gifted 2 penalties as the nerves set it.

Annan did seem to try to give it away at the end but thank goodness for the final whistle!

So a much needed win and 4 points for the 1st XV, who are still not out of the relegation battle and will probably need at least 2 wins from their remaining 4 games to at least avoid the bottom 2 . but the pints will taste that wee bit better tonight! Enjoy your evening lads!

The 1st XV lads now take a break next few weekends for the start of the 6 Nations (all matches and the Scotland Women’s matches on at 17 Bank Street – all welcome) and prepare for another huge match away to promotion chasing East Kilbride on the 15th February.

THE 2ND XV GO DOWN TO STRATHAVEN

The 2nd XV alas went down 22-10. More details when known but as 2nd XV manager Gav said “22-10 strathaven, great game to watch. They just played that little bit better” and special thanks to the referee who had a great match.

WARRIORS START WITH A WIN

At a wet and muddy Violetbank the Warriors won their first group match in the Plate competition.

Well played to both teams in testing conditions!

U14 Tigers won at a very muddy Violetbank v Wigton U14 Boys.

Well played to both teams in proper rugby conditions!

The teams after a muddy match!

HORNETS DO WELL AT CARTHA

The U16 Bigger/Hornets team do well and defeat Cartha Queens Park U16 Girls 47017 while the U18 Girls are defeated but play really well and the 3 Annan players in the team were outstanding as always.

The teams now have 2 Cup games next weekend. 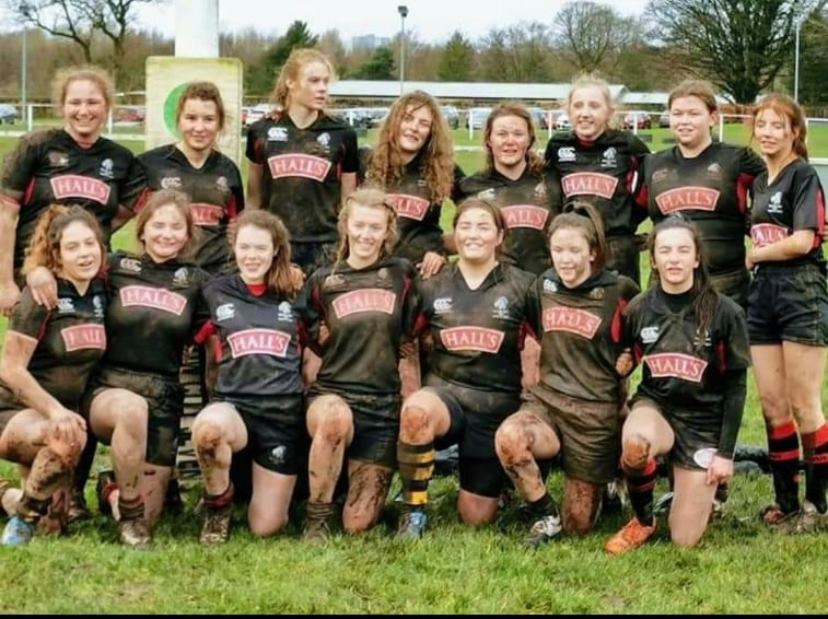 The U16 Girls after the match